Mr Patterson's speech at the Freedom of the City ceremony

At an Extraordinary Council Meeting in January 2014 held in the Town Hall, Liverpool's mayor, Joe Anderson expressed his agreement that St Paul's should receive the Freedom Roll of Associations and Institutions of the City of Liverpool. The award is the highest accolade the City can bestow upon an organisation and was given to St Paul's in recognition of its many years of outstanding work treating the people of Liverpool and beyond. At a full council meeting later that year, a unanimous 'yes' vote was secured from across the benches.

For St Paul's it was a great occasion to celebrate and a number of events were held in the week around the civic ceremony itself, including a symposium, a staff party and thanks giving service in the hospital chapel. 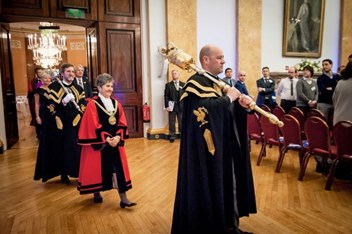 attended the packed Freedom of the City ceremony at the Town Hall on the 18th March 2015.

Amongst the guest speakers of the night was Mr Alan Patterson; a retired Consultant Ophthalmologist at St Paul's. Mr Patterson was a gentle man, a tremendous orator and was well respected and admired by staff and patients alike.  His association with St Paul's dated back to 1957, so it was only fitting that he be invited to addressed the guests at the ceremony.

His speech lasted just the 5 minutes allocated to him, however, in that time he had managed to make people laugh, feel pride that an organisation such as St Paul's 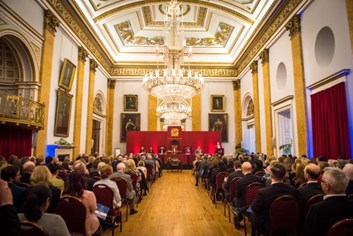 belonged to the people of Liverpool and left guests wanting more.

Sadly, Mr Patterson is no longer with us but thankfully his speech that memorable night was sent to us by his family, and for which we are truly grateful that it can enjoyed by others for generations to come.

I am very privileged to be asked to represent St Paul's Eye Unit   on this wonderful occasion and before this gathering. 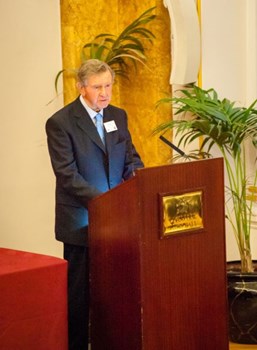 changes in the Unit over this time. St Paul's Eye Unit is a Centre of Excellence in its management, its application of surgical anaesthetic and medical skills, its supportive staff and in more recent years the development of the research departments and their application to eye problems. And we welcome the generosity the Council of City of Liverpool to recognise this excellence and to grant this honour to a medical unit

My first association with St Paul's Eye Hospital was in 1957 at which time I started my ophthalmic training. The Hospital was located in the heart of the city, wedged between Old Hall Street and King Edward Street. Old Hall Street was then almost as in Dickens time. It was cobbled and frequented by many horse drawn carts laden with products from the several factories adjoining the street. Liverpool City Council had at that time the use of some 200 horses stabled under the arches of the viaduct bringing trains into the then Exchange Station. Vehicles were few and such trucks as plied along emitted smoke and steam from coal fired steam engines. After the Annual North of England Ophthalmological Society Meeting at St Paul's, we held our annual dinner at the then Exchange Station Hotel. Afterwards, as we descended onto the platforms to bid our visitors from other northern cities farewell, I remember a cacophony of noise and steam from the engines and trains waiting to take them to their several destinations.

St Paul's was staffed by some 6 consultants with contracts of only 2 or 3 sessions per week. Within this time they were expected to cover 2 operating sessions and one clinic per week giving little time for research and administration.  Otherwise they were responsible for the units at outlying General Hospitals for example Mr MacKie Reid at the Royal, Northern and Royal Southern Hospitals, Mr Hamilton at Birkenhead, Mrs Barton at Sefton General and Nobles Hospital on the Isle of Man, Mr Brodrick at St Helens, Mr McCann and Mr Moorhouse at Southport. The Consultant Staff from 1967 were Mr Ted Cook, Tony Gray, Malcolm Burns, Sidney Davidson, Patterson, Roy Mapstone and Roy Trimble bringing us the present incumbents. It is my belief that the present day Consultant contract of full time or maximum part-time with duties at the one hospital with built in sessions for teaching and research has been a major improvement in placing St Pauls Eye Unit and other Units on the pedestal it stands today.

At Old Hall Street there was a clinic each afternoon and Saturday morning. As junior doctors we were well tended with our own dining room and maid and lunch was silver service. The hospital was administered by the Matron Eglin - a kindly disciplinarian and Mr Rivers the Superintendent who hailed from the Wirral.  Matron I viewed with some trepidation as she was apt to organise some part of your social life. I remember at the Christmas Party in that year singing "The Road to Mandalay” with Matron providing the piano accompaniment - and I assure you I didn't volunteer.  I recollect an association between the Hospital and Town Hall in those far off days. Several times in the year I was approached by some nurse with a sheepish smile who would say "Dr Patterson, matron wants to see you in her office" and I would think "Goodness what have done now". Entering those portals she would say "I have some complimentary tickets for a dinner-dance at the Town Hall on Friday evening. You will take as your partner Sister from Ward 3. Whether Sister on Ward 3 had me on her radar as a prospective Adonis I do not know, 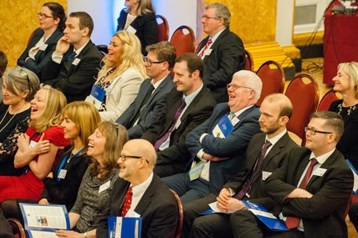 but we accepted in the correct manner this "shotgun" arrangement. Yes Lord Mayor, I have danced under these chandeliers before I suspect you and many others here today were born. These recollections I hope, portray a cameo of life in the hospital at that time. St Paul's moved to the Royal in 1992 and transferred its endearing heart and reputation as a first class centre with it.

But there is one other entity in the relationship between Liverpool City Council and St Paul's Eye Unit and it is the patient. As a Consultant Surgeon at St Paul's of some 33 years, I came to realise that the patients had and have in the Unit a deep faith in the skills of staff at all levels that they will give of their best to solve or ameliorate their eye problem. It is a faith not overtly expressed but it is ever present. The faith is part of the stoic nature of the citizen from Liverpool and environs, inbred from centuries as an immigrant port and the deprivations of World War 2 and its aftermath; deprivations that the City Council have done much to alleviate and rectify in the 64 years I have been associated with the City. I am now a patient and have learned that when the instruction "Read the chart from the top please" applies to you, life is very different indeed.

In conclusion, I remember in my latter years as a Consultant talking to a lady. I said "Your young laddie has a squint and we need to move this eye muscle back and bring this muscle forward". “Mr Patterson”, she replied, "you cannot tell me anything about squint. You treated my squint and you treated my Mother’s squint. I know all there is to know about squint". And I reflected that I had been made aware, that I had been involved with 3 generations of the same family and that it was time for me to retire.

And on that note Lord Mayor, I think it is time I retired from this podium."