Once the Northern Hospital had closed and services moved to the Royal Liverpool Hospital, St Paul’s became isolated and the growing need of its services had taken its toll on the ageing building.  Being located on a triangular piece of land prevented any idea of further extensions and if patients required certain procedures, such as X-rays,  they had to be referred to another hospital.  Prior to the Northern Hospital moving, St Paul’s patients were sometimes pushed in their bed across Leeds Street to the Northern, and if it was raining the nurse would accompany the patient holding an umbrella over the patient’s head. The difficult decision was made to relocate from Old Hall Street.

This decision proved to be unpopular amongst some staff and members of the public. 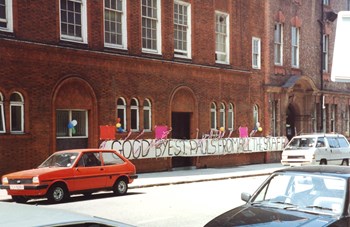 People felt they were losing their St Paul’s and staff felt it was breaking up the family.  Children were relocated to Alder Hey and some services moved into Walton Hospital although the main department moved to the Royal Liverpool Hospital and maintained its identity as St Paul’s Eye Unit. Objections to the decision was supported by 56 MPs and questions were asked in the House of Commons. Staff even wrapped the building in a banner saying “Goodbye St Paul’s”.

In reality, the move enabled St Paul’s to embrace a whole host of specialities available to them in the Royal, which created specialist services such as diabetic eye screening. Also being located close to the University of Liverpool, the first academic Professor was appointed and an academic research unit was established. 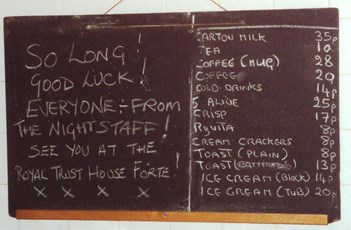 belongs to the people of Liverpool.”