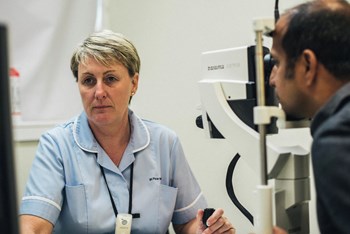 The problem: small clinical trials had been run at St Paul’s before but it was the success of a large trial into wet AMD that really increased demand for trials at the unit. This demand was a great opportunity to be involved in the development of new treatments but put pressure on the existing resources at St Paul’s and required a response.

Our solution: to create a unit dedicated to running clinical trials, with designated staff, facilities and remit. The Clinical Eye Research Centre (CERC) opened in 2004 with a funds injection from The Wolfson Foundation and the Foundation for the Prevention of Blindness. The aim was, and still is, to develop, test and refine new therapies so that they become every day treatments.

Impact: the initial major trial in 2004 has since blossomed into more than 70 trials, and the unit has seen a massive increase in patient numbers, with many benefitting from sight saving treatment. CERC initially focused on trials concerning the retina, but has since expanded its remit to include all ophthalmic services including glaucoma, eye cancers and corneal conditions, ensuring that many more local people get the chance to be involved in the development of the latest, cutting-edge treatments. Despite this expansion the environment remains one of ‘low volume, high tech’.

Many mainstream treatments have evolved during and following their trialling at CERC, and its reputation is such that it is now involved in most major ophthalmic trials being undertaken. It is a European leader in ophthalmic clinical trials and patient care. That initial cash injection from the Foundation can be seen to have contributed to the centre’s subsequent success.

You can still contribute to the development of CERC as it moves into a new, purpose-built facility at the new Royal Liverpool University Hospital.