The father of a patient who received a kidney transplant at the Royal has helped to raise the profile of organ donation, particularly within the Black, Asian and Minority Ethnic (BAME) communities, by driving from Mumbai (India) to Chester.

Priya Shah, who lives in Chester, received a kidney transplant from her husband Jaideep in June 2017 after suffering from kidney failure. Originally her father, Bhal Shekhar Chilana, was going to donate his kidney after being confirmed as a match. However, his kidney function was low and would have only lasted five years in Priya, so he was declined as a donor. Fortunately Priya’s husband was found to be suitable to donate. 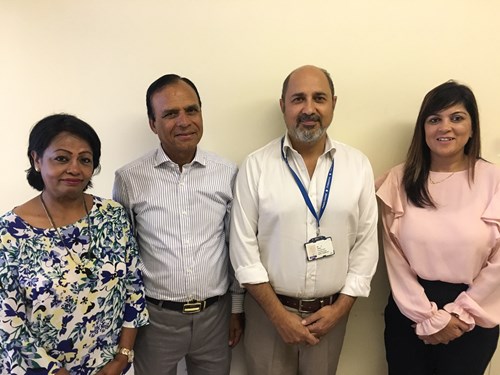 “When I couldn’t give Priya my kidney, I knew I still had to do something. So I decided to drive from India to the UK to raise awareness of how important organ donation is,” said Mr Chilana, who wanted to combine his passion for driving with a worthy cause. The trip took 79 days for him and his wife, Namita, travel with a small team across 17 different countries, including Nepal, Iran and Austria.

For Priya, she and the rest of the family were against the whole thing from the very beginning – especially when only a few weeks before the trip was due to start, her father had a heart attack.

“He had to have a stent placed into his heart and were all telling him he had to cancel the trip,” said Priya. “But he was determined to carry on and did the journey against everyone’s will, for which we gave him a lot of earache!”

According to NHS Blood and Transplants (NHSBT), around three people die each day waiting for a transplant. Currently at the Royal, there are over 300 patients registered on the transplant waiting list and many more on dialysis. However, for a proportion of patients from BAME communities, often the wait can be considerably longer as there are a lower percentage of organ donations.

At the end of 2017/18, NHSBT reported that 35% of patients on the waiting list for a kidney transplant were from BAME backgrounds, but only 7% of donors were from these communities. This low percentage for BAME patients arises partly from the need to match kidney donors and recipients according to blood and tissue types. The most common blood type for white patients is O, but for Asian patients it is B – of which there aren’t enough matches.

“In my 16 years in UK, I have only received organs from one Asian donor; the percentage is very low,” said Dr Sanjay Mehra, consultant transplant surgeon at the Royal. He and the transplant team at the Royal carried out Priya’s kidney transplant, and have been in awe of Mr Chilana’s efforts to raise the profile of organ donation.

“Typically 70% of transplants carried out are from deceased donors and 30% from living. Living donors are on the rise within the UK as more people are beginning to understand that the quality is better and there is less waiting time to find a match – it is just about encouraging more donors to sign up the register.”

In 2017 to 2018, the Royal carried out 123 kidney transplants, 42 of which were from living donors like Priya’s husband, Jaideep. It was the Trust’s best number on record.

“For us, the team here at the Royal played a massive role in our decision making of whether to wait for a deceased donor or living,” said Priya, who thanked Dr Mehra and living transplant co-ordinator, Ann Strong, for all their support in the process.

Meeting Dr Mehra really assured us that receiving a kidney from a living donor would be fine. Jaideep and I have a six year old son and we didn’t want to put one of us at risk and make life worse, but the team here at the Royal played a very good role in bringing us both to a stage where we knew we could say yes. They were brilliant.

For Mr Chilana, his epic journey may be over, but it certainly won’t be his last: “This is just the beginning; I have so much more I want to do.”