Faith leaders from across the city region have joined together to bless the new Royal Liverpool University Hospital, as staff begin the move into the building before welcoming patients next month.

Representatives from the Church of England, Greek Orthodox, Islamic, Jewish, Roman Catholic and Sikh communities read prayers of blessing at the service, which was led by the hospital’s chaplaincy and took place on the first day of the hospital’s phased 24-day move.

Reverend Maggie Johnstone, Chaplaincy Team Leader at Liverpool University Hospitals NHS Foundation Trust, said: “It was a joyous occasion and reflected the sense of togetherness and community, which is a reflection of the Liverpool City Region. The city has waited a long time for this hospital and it doesn’t disappoint. The facilities look amazing and it was a privilege to join faith leaders to bless the hospital before it is occupied by patients and staff.”

Guests at the event included mayors and local authority representatives from across the city region, senior leaders from NHS Cheshire and Merseyside and NHS England, colleagues from neighbouring hospital trusts and leaders from the city’s universities, who were given guided tours of the new hospital to learn more about the benefits it will bring to patients and staff. 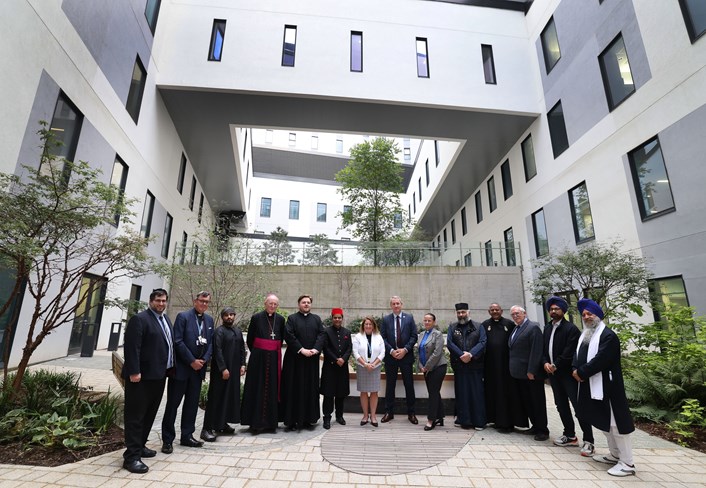 The event also included a performance from the Lighthouse Choir, which was formed by Liverpool Lighthouse, a local charity that works with local communities to tackle the root causes of social disadvantage.

James Sumner, Chief Executive at Liverpool University Hospitals NHS Foundation Trust, said: “Since we took partial possession of the building in July, we’ve been working hard installing and commissioning equipment, planning the move and putting more than 7,500 staff through a rigorous induction and training programme.

“I was delighted to welcome faith leaders and members of our local community to bless our hospital ahead of opening our doors to our first outpatients next week. The event reflects the fact that the new Royal is for the people of Liverpool City Region and we are so proud that will soon be able to give our patients, staff and local communities the long-awaited hospital they deserve.”