Genetic testing was highlighted on last night’s episode of BBC Two’s Hospital, when Trust consultant clinical scientist, Alistair Reid, and consultant histopathologist, Tim Helliwell, tested a sample from baby Jaxon’s tumour. Their aim was to find information about the make-up of the tumour from its DNA, in an effort to see if there were any drugs able to treat Jaxon’s cancer instead of extensive surgery.

The Trust is part of the North West Coast Genomic Medicine Centre (NWC GMC), one of 13 centres established by NHS England to help gain a better understanding of the genetic causes of cancer and rare diseases. It represents a number of NHS organisations working together to test many common and uncommon cancer types. The centre is led by Liverpool Women’s NHS Foundation Trust, and supported by other trusts in the region. 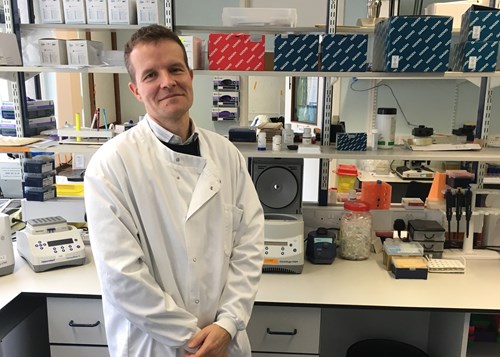 “The centre has been part of the ambitious 100,000 Genomes Project, which finished not long after we filmed for Hospital in December,” said Alistair. A genome is a complete set of genes, plus DNA, in almost every healthy cell in our body. The aim of the project was to collect 100,000 genomes from NHS patients, in a bid to improve cancer care, treatment and outcomes through personalised medicine.

Cancer is the UK’s single biggest killer. Over 350,000 people are diagnosed every year, with over 160,000 people dying annually. The reason cancer was included in the 100,000 Genomes Project is that it can be described as a genomic disease. Cancer is caused by changes to DNA which leads to cells dividing uncontrollably. By comparing the DNA sequence from a patient’s tumour and healthy cells, it can provide insight into the exact nature and genomic changes that are associated with an individual’s cancer.

These results can then be used by clinicians to help with both diagnosis and treatment choice. Genomics is helping to deliver precision medicine that is more effective in treating patients on an individual basis for their specific needs.

“Labs already perform some genetic testing in certain cancers, usually asking one question at a time such as whether a particular abnormality is present that might indicate response to a specific targeted therapy."

In December, the project reached its goal of sequencing 100,000 whole genomes. Now the data will be analysed with a view to uncovering patterns about specific genetic conditions, helping clinicians with diagnosis and treatment choice and also showing which patients are not likely to benefit from a specific treatment, saving unnecessary treatments and toxic side effects.

“There is a transformational aspect to the project, but it’s also a research project in the classical sense. The data generated will be mined for answers to important questions, such as what genetic changes drive particular cancers, which of these might make good drug targets and even technical questions about how best to detect some of these abnormalities."

For more information on the 100,000 Genomes Project, visit https://www.genomicsengland.co.uk