The Royal Liverpool and Broadgreen University Hospitals Trust has been involved in a ground-breaking project that aims to change the way warfarin is prescribed for patients with atrial fibrillation (AF). 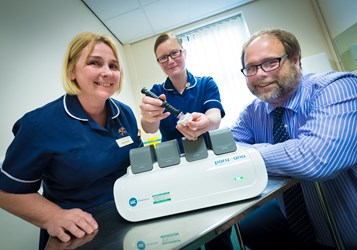 Atrial fibrillation is a heart condition that causes an irregular heart rate. Warfarin is a well-established oral anti-coagulation medication that is often prescribed to stop blood clots forming.

This innovative project has made warfarin medication personalised to each patient by using a DNA sample from a simple mouth swab. The dose was then provided based on your genetic test, in addition to other factors such as your age, height and weight.

Recently this pilot project was recognised and announced as one of the winners in the AF Association – Healthcare Pioneers Report – showcasing ‘best practice’ in atrial fibrillation (AF) at the Arrhythmia Alliance Awards ceremony.

Gail Fitzgerald and Clare Prince, research nurses from our Trust and the Wolfson Centre for Personalised Medicine at the University of Liverpool have been working on the implementation project from the start, they said: “This is a great achievement for everyone involved in this project to be highlighted in the Healthcare Pioneers Report."

“By using the latest technology the Para-DNA machine provides genotyping results in just 45 minutes. In the clinics we have been able to implement and evaluate whether genotype-guided dosing of warfarin is feasible in clinical practice.”

The Royal was one of six hospital trusts in the North West that took part in the implementation project, which ran between March 2016 and September 2017.  Warrington Hospital and the Countess of Chester Hospital also piloted this new method of dosing.  Three other hospital trusts continued to follow current practice. Patients with AF who were due to commence anti-coagulation with warfarin were invited to participate.

The evidence of the project is still being evaluated, but the aim is to change the way we provide doses of warfarin in NHS clinics, improve anti-coagulation control and make the dosing more accurate for each patient as well as cost-effective. Currently in the NHS the medication is provided in a standard clinical dosing procedure but this new project identifies how you would respond to warfarin by testing your genetics first.

It has been identified that two major genes can change the way your body responds to warfarin, with a 40% variability, so by testing your DNA first this could have a big impact in ensuring each person receives the right amount of anti-coagulation medication. 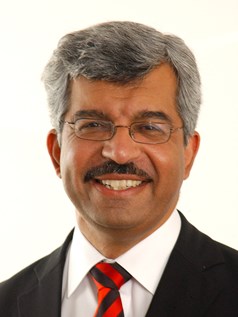 Professor Sir Munir Pirmohamed, a consultant at the Royal, and from the Wolfson Centre for Personalised Medicine said: “This is a great a collaborative project between the University of Liverpool, the North-West Coast NIHR Collaboration for Leadership in Applied Health Research and Care (CLAHRC), the Innovation Agency (NW Coast AHSN) and Laboratory of the Government Chemist (LGC) to implement an innovative method for improving dosing of warfarin in the treatment of atrial fibrillation in three North West anticoagulation clinics.

“We developed novel algorithms which incorporated genetic factors – we were able to show in a randomised controlled trial that genetic dosing was more accurate than current dosing used in the NHS. We have then moved this forward to an implementation phase where nurses running the anticoagulant clinics were able to test patient genes (within 45 minutes), and dose them accurately using this information. At the time of the publication of the Government’s Industrial strategy, we are very pleased to show how a multi-disciplinary and public-private collaborative project can be implemented within NHS clinics."