A husband and wife whose time spent outside of their work at Liverpool University Hospitals is dedicated to improving outcomes for people in Black, Asian and Minority Ethnic (BAME) communities, have been recognised with a national award.

Akinola and Olubukola Adewunmi, who are both biomedical scientists at Liverpool Clinical Laboratories, won the Health and Wellbeing Advocate award at the National BAME Health & Care Awards 2021. 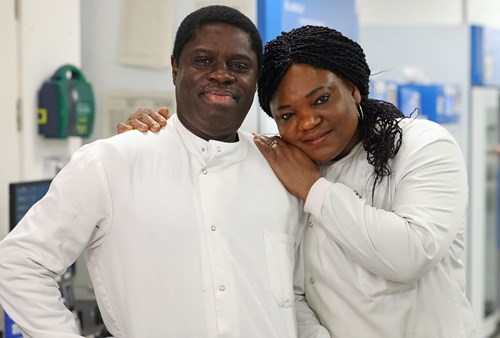 The couple were nominated for the award by their colleagues at Liverpool University Hospitals NHS Foundation Trust for their work supporting those with sickle cell disease - the fastest growing genetic blood disorder in the UK - in Black, Asian and Minority Ethnic (BAME) communities.

Olubukola said: “We are so excited that our activities within our communities have been recognised. This award will definitely inspire us to do more for our communities.”

In 2012 the biomedical scientists established an innovative health initiative, PathLab Support, to support adults and children with sickle cell disease. Both Akin and Olubukola are sickle cell carriers, and there was also a 25% chance of each of their three children being affected. Thankfully it wasn’t the case, but it was this experience that inspired them to set up the community interest organisation.

There is a national shortage of blood donors from BAME communities, which makes it harder to find the best-matched blood to treat these patients, who often have wider health challenges as a result.

Myths, cultural and religious beliefs often play a significant role in deciding to donate blood, and the couple try and help address these by working with community leaders to build awareness and break down perceived barriers. As Olubukola is also a professional counsellor, she has used her counselling skills to support or improve the mental health and wellbeing of people within the community.

Akin said: “We wanted to do something for others by raising awareness of the disease, in turn increasing donations and supporting affected individuals and families. Working in the blood transfusion laboratory gives me the opportunity to see the ‘miracle’ of blood transfusion, how it improves and saves the lives of many patients.

“This award is dedicated to all the blood donors in the Liverpool area, especially blood donors from BAME communities who are already saving lives and those that will sign up in the future.”

The PathLab team have now recruited approximately 600 blood donors from Caucasian and BAME communities in the Liverpool City Region, which includes Pakistani, Nigerian and Somali communities. The initiative has also helped hospital care for children in Nigeria, where Akin was born, through offsetting hospital bills and donating toys and gifts.

Steve Warburton, Chief Executive of Liverpool University Hospitals, said: “Congratulations to both Akin and Olubukola for the amazing work they are doing to help support those affected by sickle cell disease in their communities.

“They clearly demonstrate the values we hold here at Liverpool University Hospitals, with their commitment to patient care extending outside of their work at Liverpool Clinical Laboratories into the innovative PathLab Support. Despite a very challenging year, they have continued to offer support to those who need it and we are very proud of them both. Akin and Olubukola are role models to fellow colleagues and those in the community.”