Last month, 91-year-old Joyce Carter was on the search for the kind stranger who bought her a kettle while she was out shopping. We’re pleased to say that the mystery man has now been found and the pair reunited over a cup of tea in the volunteering office here at the Royal.

The generous gentleman, who wishes to remain anonymous, purchased the kettle for Joyce while she was out shopping in TJ Hughes. A Liverpool publican, he had wanted to do something to say ‘thank you’ to the Royal after his father had life-saving surgery in the hospital earlier this year. 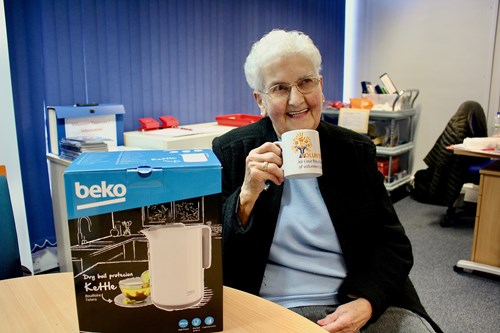 It seems that Joyce was in the right place at the right time for him to repay his thanks, as when he found out she was a volunteer at the Trust, he leapt at the chance to give something back.

“We were in the basement of TJ’s and I got talking to her. When she said that she was a volunteer I asked her, well what do people do for you? That’s when I decided I wanted to buy the kettle for her as a thank you.”

The anonymous shopper was notified of Joyce’s search for him after a relative of his saw an article covering the story in the Sunday edition of the Liverpool Echo.

His establishment is run by Star pubs, which is part of the Heineken group, and the pub is now planning to arrange an afternoon tea for some of the volunteers and a few other events in the future. The group are also working toward an NHS staff discount scheme across the pubs.

For Joyce, who has volunteered at the Royal for 21 years, she was just pleased to be able to thank the charitable man properly for his generosity: “I had given him a hug when he first bought me the kettle but I felt as if I should have said something else, but I was just so gobsmacked. I cried when I got out of the store. It’s been really lovely to meet him properly today.”