Steve Walls and the Crafty Companions Cycling Circle have raised thousands of pounds cycling the canals of the country in honour of his late wife, Barbara 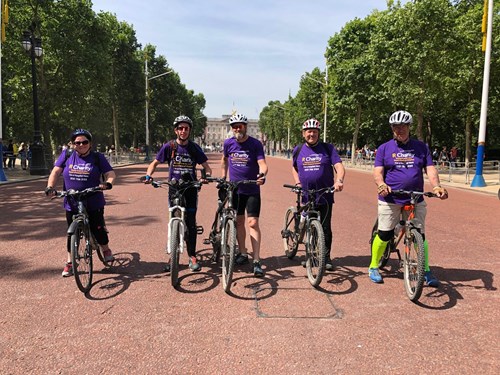 When Steve Walls’ late wife Barbara was diagnosed with breast cancer in 2013, he knew that he had to do something to say thank you to the staff in the Linda McCartney Centre at the Royal Liverpool University Hospital for their continuous care.

“The girls in the centre were brilliant. I just wanted to do something to say thank you for being so helpful and thoughtful – everyone in there is so positive,” said Steve, 66. He decided to rally his friends, otherwise known as the Crafty Companions Cycling Circle, and embark on a one-off bike ride to raise funds for the centre.

Sadly Barbara passed away in March 2015 before the first bike ride, the ‘Coast to Coast’ cycle from Humber Bridge to the Pierhead along the canal system. However in July 2015, to honour her memory Steve and his friends, many of who had also lost friends and family from cancer or suffered themselves, took to their bikes and set off on the 165 mile journey.

“It was hard, physically and mentally. I wasn’t a cyclist beforehand so you did have to put in the effort. It’s a lot harder cycling on canals than cycling on roads, that would have been a luxury,” said Steve. “When we reached the end, we all wanted to do it again and it just took off from there.”

Since 2015, the Crafty Companions Cycling Circle have embarked on five different cycle rides, cycling over 1000 miles of canal and raising £29,040.53 for various charities including £20,423.59 for the Linda McCartney Centre. Their most recent fundraiser saw them cycle 237 miles from Liverpool to London.

For the past two years Steve has been joined on the cycle rides by R Charity community fundraiser Angela McShane. R Charity raises funds to enable the Royal Liverpool and Broadgreen University Hospitals NHS Trust to provide the best possible health care to their patients.

Angela, who had never ridden a bike until taking part in the Leeds to Liverpool ride in 2017, wanted to get involved to show her support: “I am a firm believer that you can’t ask people to fundraise for you unless you have also done it yourself. Steve made it sound so easy, so I thought if these guys can do it, I can do it too and show my support.”

Will there be another cycle next year? Never say never to anything, says Steve: