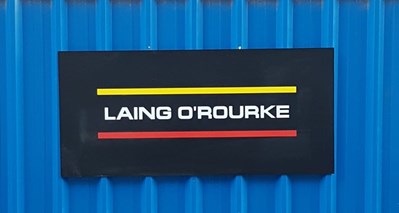 Laing O’Rourke has begun working on the new Royal site and new signage is being installed, replacing Carillion’s.

Since 12 November the firm has been carrying out various surveys of the building along with a team of advisors from architects NBBJ and structural engineers Arup and is working to clear the site and establish it as a Laing O’Rourke site.

From 3 December, these early works will begin to gather pace and continue over the next four months. Within this phase of works, the Security Room for the new Royal will be completed and will be used to monitor CCTV throughout the new hospital building, during the construction period. Laing O’Rourke will also begin work to modify the ventilation system in the anaesthetic rooms in theatres. This requirement was identified during Carillion’s tenure, but the remedial works were not completed.

Also during this phase, work will be undertaken to gain access to areas of the structure requiring remedial works that are identified in Arup’s structural review. In addition, work to review the existing lighting installation, where the energy saving system is not yet fully operational, will be completed in February. It will then be possible for the lights to be turned off when areas of the building are not occupied. 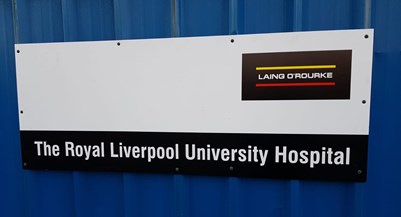 Laing O’Rourke will provide a detailed construction programme in the New Year and this will set out a timescale for handover towards the end of 2020. It is also expected that Clatterbridge Cancer Centre, also being built by Laing O’Rourke, will be completed as scheduled in spring 2020.

The Trust is also currently working with Laing O’Rourke through the procurement process, with around 140 works package contractors who were previously employed on the site. Having all these contracts in place will not only help facilitate a swifter restart of construction, but means that where possible, the Trust retains the warranties for the original works, as well as the completion works.

"After such a challenging and turbulent time over the last 11 months, we are glad to see work begin back on the site and we are looking forward to the New Year with fresh optimism. With Laing O’Rourke and others in place, more contractors to follow in the coming months and work returning to the site, our staff are now refocusing their attention on our plans for moving in. We can all look forward positively to getting into the new Royal and seeing our aspirations for providing world class facilities and a platform for a global life sciences hub, to the people of Liverpool, come to life."

"The team is now mobilising with important early work already underway. The pace of delivery will grow in the New Year and all involved are energised and committed to completing the new Royal for the people of Liverpool. Having led the new Alder Hey Children’s hospital, I feel personally invested in Liverpool and proud to be leading completion of the new Royal; and with colleagues next door currently on site at Clatterbridge, Laing O'Rourke is hugely proud to be playing its part in delivering facilities that will help improve healthcare across Merseyside."