Great Britain Paralympic swimmer Stephanie Slater visited the Department of Eye and Vision Science based at the University’s Institute of Ageing and Chronic Disease (IACD) in support of a new eye donation initiative and to see first-hand the work that is being undertaken to pioneer new treatments.

Launched by St Paul’s Eye Unit at the Royal Liverpool University Hospital, the initiative aims to raise the awareness of the importance of eye donations for transplant and research purposes. It also encourages more people to donate their eyes to help others affected by sight loss. 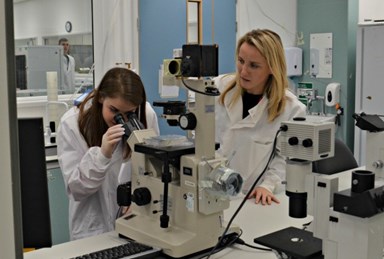 Stephanie began her sporting career as an able bodied athlete, but after suffering nerve damage to her left arm she switched to parasport. At the Rio 2016 Paralympics she won both Gold and Silver as part of Paralympics GB team.

However, before these highlights in her sporting career she was diagnosed with a sight threatening eye condition, keratoconus, which affects the cornea and can make your vision distorted and blurred.

As a result of the condition one of Stephanie’s eyes received the latest treatment to prevent the condition getting worse, but the other eye was too badly affected and Stephanie required a corneal transplant.

Consultant eye surgeon at St Paul’s Eye Unit, Royal Liverpool University Hospital and Honorary Director of Studies at the University’s Department of Eye and Vision Science, Mr Mark Batterbury, undertook to perform the corneal transplant after this year’s Paralympic Games so that Stephanie could train without interruption and then compete in the 4 x 100m Medley Relay and the 100m Butterfly.

Stephanie said: “It was so important for me to be at the 2016 Paralympic Games because my lifelong dream of competing in the Olympics ended before the London 2012 Games when I was diagnosed with nerve damage to my left arm. At the time I thought it was the end of my swimming career as well.

“I was diagnosed with keratoconus back in 2008 and was under my local hospital until my sight really deteriorated in 2013. I was then referred to St Paul’s Eye Unit, as it’s a specialist centre for treating eye conditions. They started me on a ground-breaking treatment called corneal collagen cross-linking to stop my left cornea becoming worse and me losing my sight. However, my right eye was already too badly affected and could no longer be corrected by glasses or contact lenses so the team decided to give me a new cornea via a transplant. 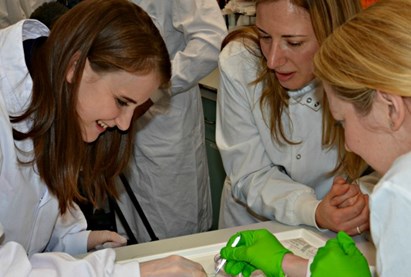 “The cornea came from someone kindly donating their eyes so parts, such as the cornea, could be used to help others see again. Without the cornea my sight would have continued to get worse and I may have gone blind. I now have been given the chance of gaining vision back and being able to drive. It will also help me daily with my sporting career and fulfilling my dreams.

“I know of others who currently have to wait for a corneal transplant because there is a shortage of people donating their eyes. Losing your sight has a massive impact on your life and there is something that everyone can do to help others.”

Mr Mark Batterbury, said, “For every person that donates their eyes we are able to give the gift of sight to two people. What people don’t also know is that we can use their eyes even if they have poor vision themselves. Also, eyes that can’t be used for transplantation can be used to help our pioneering research to develop new sight-saving treatments.

“Unfortunately, many organ donors choose not to donate their eyes, for many different reasons, more so than any other organs. Stephanie is an example of the importance of donating eyes to help others. It’s vital that if you wish to donate your eyes you register on the organ donation website and inform your next of kin of your decision.”

The University of Liverpool in partnership with the Royal Liverpool and Broadgreen University Hospitals NHS Trust has been leading research into eye screening for the disease since 1991.

Professor Simon Harding, Chair of Clinical Ophthalmology, IACD’s Department of Eye and Vision Science, said: “The cornea is used to give the gift of sight, whereas we use other parts of the eye to development ground-breaking treatments for far reaching patient benefit.

“In our labs we can study cell behaviour to better understand why people lose their vision and what steps we can take to prevent this happening. Through people donating their eyes it means that research projects will no longer be hindered by the lack of suitable eye tissue and help us to develop new treatments more quickly.”

Stephanie added: “There is so much more awareness around the importance of donating organs, but I think there needs to be more awareness of the importance of donating your eyes too. Not many people actually know how much of the eye can be used to help other people, whether it is by transplant or for research into pioneering treatments. Sight is taken for granted and it’s only when you actually begin to lose it do you realise how vitally important it is. It really does have a major impact on doing the simplest day to day tasks.

“For me it is important that I use my story to encourage people to donate their eyes, as well as other organs, so that you can leave a lasting legacy of helping others when we leave this life. Without this person’s generosity my life would be so different and I will be forever grateful to them.”

Of the visit Stephanie said: “It’s absolutely amazing. I just didn't realise how complex and interesting the eye is. We are so fortunate to have attracted these experts from around the world to the North West of England to find new treatments for eye disease.”

If you would like to contact someone about this story, or to find out more information, email our dedicated Communications Team here