Barbara Watkinson, 70 was diagnosed with Type 1 diabetes in 1955 when she was just nine years old, and has continued to manage her condition for over 60 years. 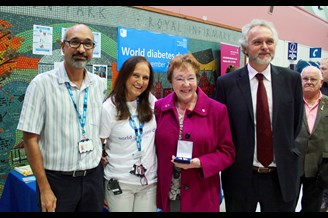 In her adult life she attended regular clinics here at the Royal Liverpool University Hospital and with the support from clinicians and specialist nurses, Barbara has continued to maintain her health and has never been hospitalised due to a diabetic complication.

She found the staff invaluable to help support her and give her advice, even attending a carb counting course which educates patients on how they can enjoy specific foods in moderation which were previously off limits.

Barbara said, “No one can look after you as good as yourself, but the team at the Royal have helped educate me about my condition so I am in control and can safely manage my diabetes. When I am not attending my appointments in the Royal, my local GP practice nurse is always very helpful and provides me with advice and support when I need it.”

“My husband Stan was diagnosed with Type 2 diabetes in 2013 and through the knowledge I’d gained from the carb counting course I have been able to look after not only my own diabetes but his too!”

Now retired Barbara lives in West Derby, with her husband, she has four grandsons to keep her busy.

Barbara’s thirst for life, her positive attitude and awareness of her condition has allowed her to live her life to the fullest; nothing stops her doing what she wants to do, despite having diabetes.

Barbara said, “It’s fantastic to have received this medal today, I am quite proud to be awarded with such a prestigious award. As for my diabetes, I think you have to be positive about your life, don’t be negative and look after yourself.”

“If you think you have diabetes or if you have already been diagnosed with the condition there is lots of help out there. The team at the Royal Liverpool Hospital have been fantastic and really supportive. They even invited me along to attend a carb counting course, which helps me understand my diet better and how eating certain things can impact on my health.”

Julie Brake, diabetes specialist nurse at Royal Liverpool University Hospital said, “We are really proud of Barbara, she is a fantastic example of how understanding your condition and how to manage it is really important to maintain good health. We have learned as much from her as she has from us.”

Stuart Vaughan, Diabetes UK volunteer development manager, added: “It’s an honour to have presented Barbara with the Robert Lawrence medal today and to be celebrating this moment with her. It’s testimony to both Barbara and the support she has received to help her manage her condition effectively and show that diabetes doesn’t have to be a barrier.”

Barbara was presented with the Robert Lawrence award by Stuart Vaughan from Diabetes UK, Dr Purewal a consultant at the Royal Liverpool University Hospital and clinical lead for diabetes on World Diabetes Day 2016.

In 2006, Barbara was presented with the Alan Nabarro medal which marked 50 years of having and managing her diabetes, 10 years later she is now eligible for the highest accolade given by Diabetes UK, the Robert Lawrence medal which celebrates 60 years living with diabetes.

The medal is named after Dr Robert Lawrence who co-founded the Diabetic Association, now known as Diabetes UK, with H.G. Wells in 1934.

Barbara’s story begins as a youngster, having spent a number of years in and out of hospital attending regular diabetes clinics at Alder Hey Children’s Hospital NHS Trust.

Barbara said, “Being a patient at Alder Hey gave me the chance to meet others with Type 1 diabetes. I can remember that the nurse who that looked after me and the other children had a relative with diabetes. She would let us out to play and would even make special batches of ice cream for us all using diabetic friendly recipes.”

Barbara added, “This made me realise that I too could enjoy certain things as long as I was aware of how to safely manage my blood sugar.”

It was at Alder Hey Children’s Hospital that Barbara was taught by health professionals how to safely manage her diabetes at home to enable her to enjoy a normal lifestyle.

From a young age Barbara always wanted to pursue a career in the NHS, and so she took up a variety of different clerical positions in maternity hospitals, Alder Hey Children’s Hospital and Sefton General which is now Mersey Care NHS Trust.

Barbara said, “During my time at Sefton General I wrote to Edwina Currie, Junior Health Minister at the time asking for an improved needle exchange for diabetic patients, this was later realised and as a result diabetics were issued with disposable syringes.”

“I married in 1970 to my lovely husband Stan, almost a year after; I left work to have my first baby. At the time diabetic patients that were pregnant would have to be carefully monitored as there were increased health risks to both myself and my baby.”

“I was carefully monitored by all the doctors and nurses and was delighted when I gave birth to my first healthy baby boy, Paul in 1971. Knowing I could safely deliver I went on to have my second son Ian in 1972.”

If you would like to contact someone about this story, or to find out more information, email our dedicated Communications team here