Winners of the North West Coast Research and Innovation Awards

The Royal Liverpool and Broadgreen University Hospitals Trust is celebrating this month as two teams won at the North West Coast Research and Innovation Awards.

The awards were presented at a celebratory event at Preston North End, recognising research and innovation that has made a significant improvement to NHS and social care. 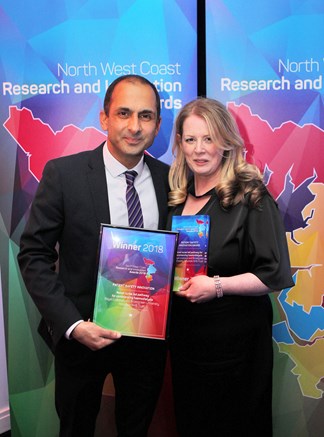 We collected the Patient Safety Innovation Award for the ‘Novel nurse-led pathway for commencing haemodialysis’ project.

This novel, nurse-led pathway reduced deaths in the first three months of treatment for patients with kidney failure.

The team used quality improvement methodology to develop a series of mandatory and personalised interventions, delivered over the first six haemodialysis sessions. The primary aims were to reduce early mortality and minimise patient distress.

Successful implementation of the pathway reduced 90-day mortality from 5.1%, which is the national average, to 2%, which is a fantastic achievement. The changes also reduced patient distress from an average score of 4.3 to 2.4.

The work was undertaken with the primary aim of improving quality and safety, but has also released significant cost-savings of around £400,000 per year.

"The project received some funding from the Health Foundation and is now being spread to Aintree University Hospital, with interest also expressed by other trusts."

“The company 2Bio helped with project management and we used a business analytic software tool to look at data and see what was improving and what wasn’t. Using this approach and the software was an eye opener for me and it has made me passionate about the importance of data.”

Consultant nephrologist Asheesh Sharma added: “We are now developing a toolkit, having attracted further funding support from the Health Foundation, to help spread the pathway and we hope it will be adopted as best practice across the system.” 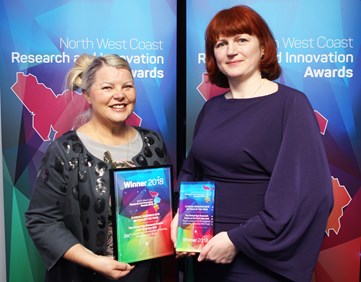 Our second award of the night was the Clinical Research Team of the Year collected by St Paul’s Clinical Eye Research Centre.

Since opening in 2004, the Clinical Eye Research Centre (CERC) at St Paul’s Eye Unit has gone from strength to strength.

An initial major trial has blossomed into a total of 70 trials with 17 currently under way.  Staff have refined patient recruitment and participation processes, streamlined patient attendance pathways, upskilled staff, developed new relationships with pharmaceutical companies and other hospital departments, and managed 100% increase in patient numbers. CERC’s reputation is now such that it is involved in most major ophthalmic trial being undertaken.

Mr Ian Pearce, consultant ophthalmologist and director of CERC, said: “St Paul’s is internationally renowned as a centre of excellence for the treatment and research of eye disease and we are all absolutely delighted to receive an award that celebrates our work."

"The award not only reflects the dedication, hard work and team spirit of all CERC staff, but also the huge amount of support we receive from our patients; without them so willingly getting involved in research here we would not have been able to achieve so much."

This was the third North West Coast awards event and judges dealt with a record number of entries. It was organised jointly by the Innovation Agency; NIHR Clinical Research Network: North West Coast; and NIHR Collaboration for Leadership in Applied Health Research and Care North West Coast.