Tackling the London Marathon for her hospital ‘superheroes’

In 2014 Victoria Threadgold was rushed into the Royal’s A&E – her bowel had burst, she developed sepsis and then spent six weeks in intensive care – but now she’s on a mission to complete the London Marathon to raise money for the hospital that saved her life.

“I owe everything to the intensive care team at the Royal, I wouldn’t be here without them! They’re my superheroes so if I can raise some money for the hospital it’ll be my way of saying ‘thank you’. I want to make the most of life now thanks to the care I received,” said Victoria.

Since 2008 Victoria has been under the care of the Gastroenterology Unit after she found out she had Crohn’s disease. She had been living normally with the inflammatory bowel disease but suddenly became ill. 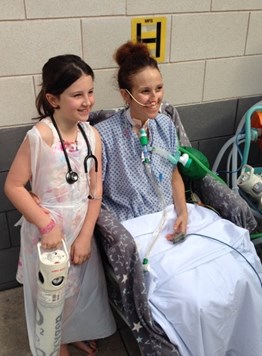 “It was a real shock, I’d only ever had one bad flare up with my Crohn’s, I was working and looking after the children as normal, and then my bowel burst. I was rushed to A&E and had surgery straight away, then given a colostomy bag because my bowel needed time to heal, but then I deteriorated and developed sepsis,” said Victoria.

She added: “I was in intensive care from 24 August until 2 October 2014 and was put in an induced coma for three weeks to give my body time to fight the infection. After antibiotics and a tracheostomy I thankfully started to recover.

“Due to the side effects of my treatment I needed to learn to walk again and I’d lost loads of weight so I had to be hoisted in and out of bed, the whole experience was a lot to deal with.”

Victoria continued: “I spent time on the High Dependency Unit and then 8X, it was a long-term recovery and I spent a lot of time with the physio team trying to build my muscle, weight and strength back up again. After my bowel had healed I was then lucky enough to have a colostomy bag reversal. It was around 20 months, in April 2016, before I was back to ‘normal’.”

A turning point was when her daughter, then age eight, wanted to go running at Liverpool Harriers club, so she asked Victoria to go with her. Victoria said: “I was nervous and didn’t want to push myself but it really helped me. The people were so supportive and now I go there to help out, plus with their encouragement I started running longer distances from 10k to half marathons.

“I’ve done a couple a charity events for R Charity, including the firewalk in 2016 and a half marathon in 2018, so when the opportunity came to sign up for the London Marathon that was something I couldn’t pass up – although I knew I’d have to step up my training!” said Victoria.

The London Marathon is now scheduled to take place in early October. She added: “It’ll be so emotional on the day with an amazing atmosphere so I really can't wait to be able to enjoy it.”