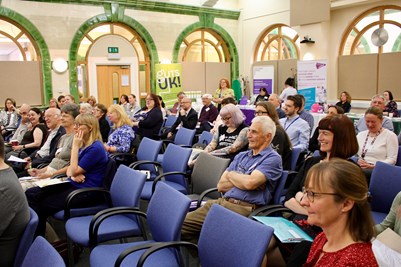 The group is committed to prioritise research on behalf of all those affected by pancreatic disease, including patients, carers and their families. It has contributed to the research agenda of Liverpool University and the Royal Liverpool and Broadgreen, the most accomplished centre of pancreas research in the UK.

They have been pivotal in developing new patient and public involvement and engagement strategies at the Trust in Liverpool, where patients now have a prominent role, particularly in the Research, Development and Innovation Directorate.

The group has contributed to the organisation of five annual National Pancreas Diseases Patient and Public Forums, organising the last three entirely with support from the Trust. These Forums provide education and an opportunity to strengthen the patient voice.

This year’s Forum was held on the 18th May 2018 at the Foresight Centre, University of Liverpool, and was entitled ‘Using the patient voice to influence care, education, research and outcomes.’

"The event gave patients, carers and their families the opportunity to meet others affected by pancreatic disease and also to meet professionals in a relaxed, informal atmosphere." 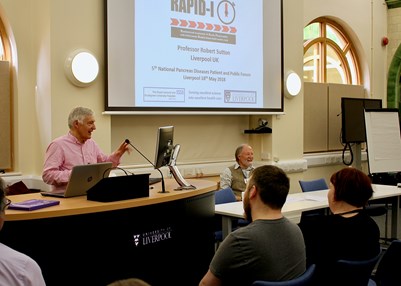 A total of 78 delegates attended the forum, and guest speakers included Professor Robert Sutton, Professor of Surgery at the Trust, Professor Andrew Hart, Professor of Gastroenterology, Norwich, Dr Michael Goulden, Consultant Anaesthetist and lead for Acute Pain management at the Trust, Dr Lynn Greenhalgh, Consultant Geneticist , Liverpool Women’s Hospital and Ali Stunt, Founder and CEO of Pancreatic Cancer Action and Chair of the World Pancreatic Cancer Coalition, who was diagnosed with pancreatic cancer herself in 2007.

The programme focussed on the influence and the importance of the patient voice and what patients can achieve.

The day was chaired by Will Swindlehurst who is also chair of the Pancreas Patient Advisory Group. Amy Lucas (PPAG group member) was a guest speaker informing us about her important role as a lay member of the committee on NICE guidelines for Pancreatitis, highlighting again the importance of the patient voice.

During the afternoon workshops were held to encourage open discussion, sharing of experiences and themes for research in the future. These were followed by ‘Question Time’ giving the delegates the opportunity to discuss issues with the panel of experts.

The day has been extremely well received:

"‘It was fantastic and I learnt so much’ ‘I learnt so much and it was great to meet other patients’ ‘A very welcome opportunity to learn from professionals and patients, thank you’."

If you have been affected in any way by pancreatic disease and would like information about the group and its work please drop Fran Westwell a line:

The NHS has put in place measures to ensure the safety of all patients and NHS staff while also ensuring services are available to the public as normal. If you have a hospital appointment then you should attend as planned.