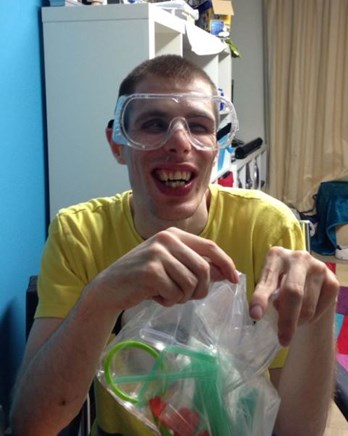 enjoying his “brighter world” thanks to the skill of the eye surgeon that took the chance to correct it.

Mat Heard, 30, was born prematurely at 24 weeks and despite his mum being told to expect

the worst, he survived.  As a result of the early labour, Mat has various medical conditions, such as cerebral palsy, and learning disabilities.  He also suffered detached retinas in both eyes. Mat had several courses of laser treatment but when he was finally discharged after six months his Mum was told he had no vision whatsoever in either eye.

Mat's Mother, Jewel, noticed he seemed to be aware of bright light.  She contacted an eye hospital in Manchester to tell them but was told 'this was not possible as both his retinas were detached’ and it was ‘just wishful thinking’ on her behalf.

Jewel resorted to appointing a solicitor in order to get Mat reassessed. Jewel said, “Mat saw a specialist at Hammersmith Hospital who said ‘miraculously, a tiny part of Mat's retina in his right eye had re-attached itself’ giving him some precious limited vision. He explained he had never known this to happen before.

“Mat had regular visits to the ophthalmologist in his early childhood until one day I was told there was no point in bringing him to clinic anymore as there wasn’t anything else that could be done.  There was no surgical solution and if there was it would be too risky to the limited sight that he had. I was told that there was nothing they could do now or in the future.”

Jewel felt helpless but told herself and Mat that maybe one day there would be a new treatment. The world of medicine was advancing all the time.

In 2014 Jewel, noticed that Mat had developed a white spot on his Cornea.  Mat was referred to a specialist. “I was told there was 'extensive scarring from his earlier treatments' and Mat had a condition called keratoconus, amongst other things”, explained Jewel. “He informed me gently and in private - so Mat wouldn’t get upset - that his sight would get worse over time - Mat’s vision would become cloudier and he would eventually lose it.  I was told there was nothing they could do. No surgical options; no further treatment. Once again, I was told there was no need for further appointments and Mat was discharged back to the GP's care.”

Accepting the news, Jewel watched Mat struggle to do the simplest of daily tasks believing 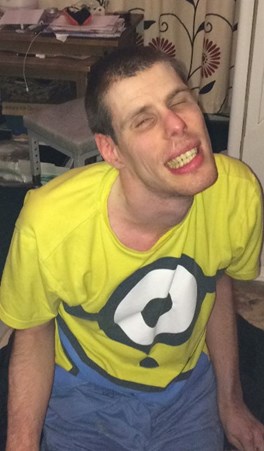 there was nothing that could be done. Mat's vision gradually worsened over the next few years. “We all presumed this was the natural progression to the corneal scarring and keratoconus as predicted”, explained, Jewel.

Jewel, continued “Mat would ask his carers to change the tube in his florescent light as he thought it was becoming dimmer. He was no longer able to pick up items he dropped because he couldn’t see them on the floor and he wasn’t able to see things on his beloved computer”.

“Although Mat is 30, he has a mental age of a young boy, and like any young boy he is loving, playful and very adventurous and he depends on the sight in his eye to do everything he loves.  To see him struggle was hard.”

Mat’s fortune was about to change when one day, he, Jewel and his personal assistant, Conor, attended an appointment at a local opticians.  “I had come to terms with Mat’s deteriorating sight by this point, but we still attended the optician appointments just to check his eye and general health” explained Jewel.

“The optician told us Mat had developed a cataract and it was quite severe and that even with Mat's limited vision if this was removed it would make a big difference to him. We were all really excited, including the optician, who immediately wrote a letter to Mat’s GP. It gave us renewed hope.  We wondered if this time the eye surgeon would operate. Besides we would always seize any opportunity to speak to them with both hands.”

Jewel contacted the surgery to pass on the news and make sure his GP knew to expect the letter. Knowing the circumstances he referred him immediately to the internationally renowned St Paul’s Eye Unit at the Royal Liverpool University Hospital.

At St Paul’s Eye Unit, Mat met consultant ophthalmologist, Mark Batterbury, who upon weighing up the options decided that he would operate.

Jewel said, “Mr Batterbury explained the operation was extremely difficult and risky due to the shape and condition of Mat's eye and the denseness of the cataract, making it impossible to see how bad things were behind it. There was a chance, during the procedure, Mat would lose the little vision he had but he would inevitably go blind without surgery. Mr Batterbury let Mat think about this, he understood how difficult life had become for Mat and when Mat said 'Go for it' he said he'd be willing to try.

“I knew Mat would be fine with the operation itself because he has always been a little battler and he’s so brave; if he hadn’t have been he would not be here with us today. We were just so relieved that Mr Batterbury was willing to take on such a difficult, unpredictable case.

“On the day of the operation we came to St Paul’s Eye Unit for 7am. The staff were brilliant 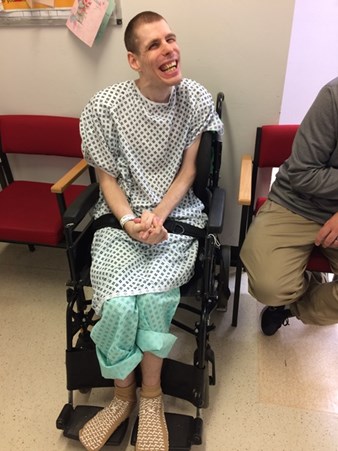 with Mat. They really cared for him and put him at ease. I knew he was in the best of hands with a very good and skilled team, but we still felt nervous.  His personal assistant that day, Simon, and I hoped for the best and tried to prepare ourselves to help Mat in case the worst happened. I had made sure that Mat knew it wasn’t a simple procedure and not to expect instant results. Mat was scared but took it all in his stride and had his usual big beaming smile on his face whilst he spoke to the team.

“The operation didn’t take long - in fact we were back home by 1.30pm that day. Thankfully, Mr Batterbury came to see me as soon as he had finished explaining the operation was a success.  The relief was immense. He had managed to remove the cataract and given him a new lens. Unfortunately it couldn't be made to measure because of the deformities in his eye but hopefully the lens would stay in place - which it did, thanks to his skills! It was just as well he'd spoken to me as soon as he did, as when we went to see Mat in recovery he went into complete panic mode. He was telling me he was blind; but that was because he had his eyes tight shut!  We put him in his wheelchair beside me and tried to get him to open his eyes. He was so upset he just held on to me tightly repeatedly telling me ‘I am blind!’ Mr Batterbury couldn't examine him as Mat had me in such a vice-like grip. He left us for a while to give Mat some time to calm down.

“It was about 20 minutes later when we were sitting in one of the examination rooms that Mat finally opened his eyes.  He said he still couldn't see anything and Simon and I exchanged worried looks. He then suddenly shrieked ‘I am focusing, Mum. It’s all bright. I can see the lights. Take me to the toilet so I can look around.' He admitted later he just wanted to look around for Mr Batterbury 'to tell him the good news'

“It wasn't long until Mr Batterbury came to find him. He was eager to make sure Mat was okay and came ASAP. Mat instantly threw his arms around him and told him he could see and thanked him exuberantly. I don't know which of them looked happier. It was a touching moment and brought smiles forth from everyone around. We were in the waiting room by this point and I think it brightened everyone's day.”

Since the operation, Mat tells everyone that everything is brighter like ‘a new bulb has been put in’.  He can now see facial expressions where he was reliant on the tone of the voice.

Jewel, said, “It may seem trivial, but it’s so important to Mat to see other people’s reactions. All too often people would smile at something he said, but to him there was just silence. Gauging people’s reactions are an important way for him to build relations with others.”

“Some months ago, before the operation, we had a beautiful full moon and I just happened to 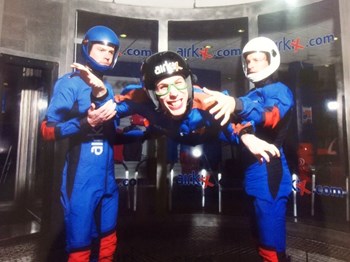 mention it to him and he asked me to take him outside to see it, but sadly he couldn’t.   During the next full moon, after he had the operation, I made a point of taking him outside again. I asked could he see it. He lifted his head up, scrunched up his face, scanned the sky then pointed right at it! This time he could see it clearly and his beaming grin actually outshone it

“I am so grateful to everyone at St Paul’s Eye Unit, particularly Mr Batterbury, for taking a chance and giving Mat a brighter future in every way.  I want them to know their commitment, hard work and compassion are very much appreciated.  Mr Batterbury has said there are still possible options for Mat and if he has further problems to come back. We know we can rely on him to try anything he can. Mat was once again discharged but this time we left feeling hopeful not helpless. It just goes to show you should never give up - there is always hope!

"Mat tells everyone he meets about his eye and about Mr Batterbury - whom, because of the speech difficulties as a result of his cerebral palsy, was for some time known as 'Mr, how do you say his name, Mum'. Since, he has now been designated the new title of 'Mr B'!

“So, Mr B and all the wonderful staff at St. Paul's, a big heartfelt THANK YOU on behalf of Mat, his friends, family and all the people whose lives you change for the better each and every day."