September 4-10th is Organ Donation Week. When we think about donating tissue it is usual to think about hearts, kidneys etc, but corneal donations are also an option for people who register to give. As St Paul’s patients and surgeons can testify, they are life changing donations, especially when coupled with surgical innovations.

September 4-10th is Organ Donation Week. When we think about donating tissue it is usual to think about hearts, kidneys etc, but corneal donations are also an option for people who register to give. As St Paul’s patients and surgeons can testify, they are life changing donations, especially when coupled with surgical innovations.

This is Mr Leonard Upton. Until January this year he suffered from Fuchs’ corneal dystrophy which affects the innermost layer of the cornea (the smooth, clear front of the eye wall). The single layer of cells that lined each of his corneas had degraded to such an extent that the movement of fluids in and out of the corneas was affected, and his corneas had swollen. Like other people suffering from this condition he had become sensitive to light, which could appear scattered, and his sight had become cloudy.

Luckily, Leonard was a patient of Professor Stephen Kaye and Dr Ahmed Al-maskari at St Paul’s Eye Unit, who were able to perform a novel operation known as a DMEK (Descemet’s Membrane Endothelial Keratoplasty). They two of a very small group of UK surgeons performing this procedure.

This extremely delicate procedure involves taking a tiny layer of donated cornea and transplanting it into the eye of the recipient. The sliver of cornea is just 10microns thick (about 0.01mm), and is carefully manoeuvred into place by the surgeon, before a bubble of gas is inserted to hold the graft in place. This requires an exceptionally high degree of skill from surgeons.

One of Leonard’s eyes was operated on in November, with the second operation taking place in January. The impact was nothing less than astounding:

“The improvement after the operation was almost immediate – I was amazed! Within a week I passed my DVLA sight test and a few days later I was driving again. I’ve got my independence back. The surgeons were magnificent! I’ve never been so impressed with anyone in my life.” 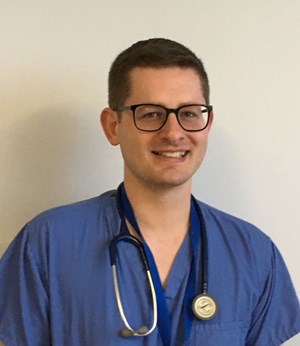 Making the most of donations

DMEK is not just extremely effective but the graft is also less like to be rejected than thicker tissue, and patients recover very quickly. Importantly, it is also a highly efficient use of donated tissue. Using such a thin layer of tissue leaves a substantial part of the cornea for use in other procedures, meaning that up to four people might benefit from a single person’s donation.

Dr Tom Opray is a big supporter of this approach, as not only is he a doctor at the Royal Liverpool Hospital but is also a patient at St Paul’s. He benefitted from a corneal transplant to treat his keratoconus (the cornea becomes thin, conical and scarred, causing poor vision). Like Leonard, Tom received a partial thickness corneal transplant but whereas Leonard’s was an endothelial graft (inner layer of the cornea), Tom’s was epithelial (the outer layer). Both are efficient uses of donated tissue. Tom said:

“When people think about donation they often don’t consider their corneas and the profound impact their donation could have on someone with sight loss. Leonard and Tom are just two of many patients at St Paul’s whose lives have been transformed through the generosity of a donor, and we urge everyone who can to register for organ donation.”

“Donations have made a huge difference to me. The transplant has given me sight that is towards normal. By donating you’re giving someone the ability to see again – no one else can do that for them – not a doctor or a surgeon. It is something I am really grateful for.”

“I’m very grateful to whoever it was who donated to me. Without it my life – and the life of my wife who relies on me - would be very different.”

You can register to donate your organs, including your corneas, at https://www.organdonation.nhs.uk/