You might remember that Dr Tici Criddle visited Fortaleza in Brazil earlier this year to kick start a diabetic screening programme which aimed to reduce instances of sight loss.

Her current screening outreach project is a lot closer to home. 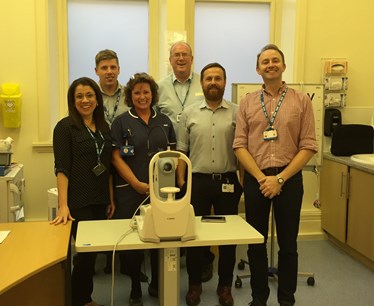 Homeless people often have poorly controlled diabetes which puts them at a higher risk of developing diabetic retinopathy and vision loss. They are also considered a hard to reach group with a very high non-attendance rate for screening appointments.

It was felt that visiting a GP surgery, rather than a hospital, would be a less intimidating environment for potential patients, especially if that surgery already had a track record of working with homeless people. The St Paul’s team is therefore collaborating with Ian Harrison (pictured far right), who looks after the local homeless population at the Brownlow Practice, and Juliette Palmer (third from left), the diabetic specialist nurse at the surgery.

The intention is to create a one-stop shop where people can have their eyes screened by an ophthalmologist, their feet checked by a podiatrist and their diabetes monitored by a nurse, all in one visit.

A screening clinic would usually involve a patient being screened and then recalled if their imaging revealed a problem, but given issues with transience and non-attendance amongst homeless people the St Paul’s team took a slit lamp to the clinic so that retinas could be analysed there and then.

The attendance rate for the clinic was 66% which was a lot higher than expected and really encouraging for the team. Those who attended included people who had repeatedly failed to attend appointments and those who had never even made an appointment, which is also considered a real success. The intention is to roll-out this model to other surgeries in the group practice

Tici said: “The success of the clinic was really down to team work, working with a surgery that has experience of reaching homeless people, and the joined up service we were able to provide. This model can definitely work in other surgeries.

"It was also really useful to be able to show patients the photos of the back of their eyes. It always has a big impact on people as they can see the changes that have already occurred, and often persuades them to take screening more seriously.”

This isn’t the only work Tici and her staff are doing with local hard to reach groups. They’ve also been visiting prisoners in HM Prison Liverpool and HMP Altcourse for several years offering the same service with similarly impressive results.