This is Jon's account of the extraordinary lengths he is prepared to go to raise money for research into eye cancer.

In July 2016, I fell off my bike and broke 4 bones. The next day, our 6 year old son was in hospital for an operation. The day after that, our first ever B&B guests arrived. We all had a tough few days! The days turned into weeks: I couldn’t return to work for over 6 months. As I was self-employed, there was no financial back-up, it was all on Sharon and just one B&B room. Understandably, she felt a little stressed looking after our son, myself, the guests and the finances!

She completely ignored the white flashes in her left eye. They began just days after my accident, and so were put down to stress, and not mentioned so as not to add further to our anxieties at the time.

On Christmas Day morning she woke (far too early because of a certain now 7 year old!) and 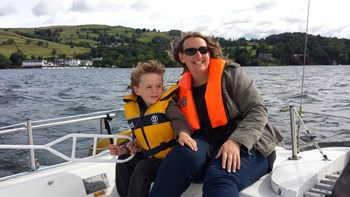 tried to rub something out of the eye with the white flashes. Her vision was blurry. For a while, she assumed that she had caught her eye on something overnight, the bedside table maybe, and it was bruised. In the excitement of Christmas Day with a young child, she brushed it aside without a second thought.

By 25th January, the ‘bruising’ should have gone. It hadn’t. It had gotten worse if anything. Sharon described it as an oil slick at the top of her peripheral vision. She could see an arch of distortion and it never left.

Sharon had once taken hydroxychloroquine sulphate for arthritis, and had to have annual eye tests because of it. So when the Dr referred her to an optometrist, she was glad it was the local one that had tested her eyes in previous years, a friendly face but with a great digital machine that could map more of the eye than a standard machine. The optometrist filed an emergency triage form to get Sharon into the local hospital’s eye clinic the next day.

The ophthalmologist at the hospital referred her to St Paul’s, Liverpool, hinting that it could be anything, including malignant. The appointment would take 2 weeks, and in that time, she didn’t leave the house or take visitors. Sharon had had 2 breast cancer scares in the past, but this felt different. It was frightening, a great big unknown, and all the signs were pointing to it being more than just a ‘scare’.

The team at St Paul’s were fantastic. Sharon was diagnosed with an ocular melanoma on Monday, 13th February, and was having surgery less than 24hrs later. Everyone we came across in our whirlwind at the hospital was so supportive. Sharon remembers fondly a lady carrying out a test on the Monday (she hasn’t a clue what it was - ‘something I had to lay down for, and you weren’t allowed in the room… There were wires and a monitor!’) who realised that she was upset and talked and talked with her about our son and our local area, which she’d been too: “Can you tell I’m trying to distract you?” she had said with a laugh. Quick thinking, selfless.

Sharon was on Ward 9Y for 8 days. On the Wednesday, as she sat in a chair, with a patch over her eye, exhausted and missing home and her little family, not yet knowing when her next surgery was to be scheduled for, she began to cry, completely overwhelmed. Colette was called for, a member of the domestic services team in the hospital. Colette entertained Sharon with song and dance until she was laughing so hard it hurt! So soon in the journey, thankfully, came that turning point for Sharon… She could sit and cry, or she could laugh and sing along. Whatever her choice, the world would keep turning. Ok, so it was a pretty bad situation to find yourself in, but you can always flip it and find the good in it. Colette wasn’t going to let the good hide away that day, or any other day that week!

The support and care we were given was priceless, and still is. Every member of staff, in every department (including behind the scenes - Sharon loved the fresh linen and meals there!), worth their weight in gold.

It’s been a tough year, but the outlook is great.

Our son is loving having all the ‘treats’ that mummy now makes sure we have, from chip shop dinner dates with friends, to impromptu days out and weekends away. I’m all mended, and back on my bike. 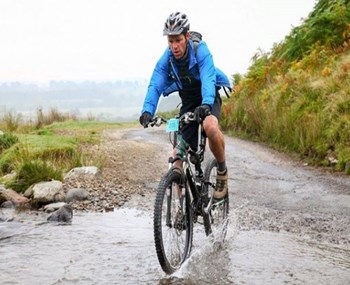 I’m back on my bike for a very special reason. On 13th May 2018 I’m riding The Fred Whitton Challenge, consisting of a 112 mile sportive around the Lake District, starting at Grasmere and taking in climbs of Kirkstone, Honister, Newlands, Whinlatter, Hardknott and Wrynose passes. It is recognised as the hardest one-day ride in the UK with it’s 13,000ft of climb. My knees aren’t the best they could be, but instead of hurtling along as I normally would, I’ll be taking my time somewhat, enjoying the fresh air, scenery and sheer exhilaration of it all. Not focusing on the bad, but appreciating the good.

It will be the biggest physical challenge I’ve faced, but I’ll be riding in support of those who supported Sharon and I during the biggest challenge we’ve faced as a family. I’m raising money for The Eye Tumour Research Fund which provides funding for equipment such as the new ophthalmic ultrasound machine that will help monitor Sharon's tumour in the coming years. The Fund also supports staff with their research into the diagnosis and treatment of eye tumours. Their work will positively affect people for generations to come.