A tribute to the founder of St Paul’s Eye Hospital and his son.

The special bond a father has with his children is unique – even more so when there is a shared interest, as evidenced by the Walker family and their life’s work “to give light” to others. 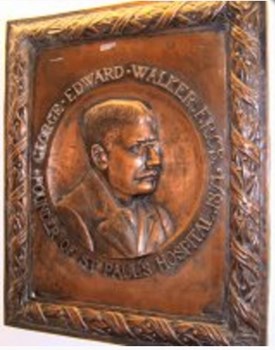 When George Edward Walker – born in Wigan in 1839 – created St Paul’s Eye Hospital in 1871, he could not have foreseen the legacy he would leave behind. A shared passion to prevent blindness, handed down from generation to generation of highly skilled surgeons and other ophthalmic trained staff to create what has become an internationally renowned centre of excellence. In 1871, Mr Walker’s motivation was to provide treatment for Liverpool’s increasing poor population, and now it provides treatment to not just the people of Liverpool, who hold St Paul’s in high regard, but to patients from around the UK and abroad.

The Wigan Post reported in 1909 under the heading “the famous surgeon”, Mr Walker, felt a calling “to do something for the poor who were suffering from those diseases of which he made a special study, and so he took two small rooms in a house of St Paul’s Square”. His compassionate and skilled work attracted greater attention and the work of the hospital went on growing at an alarming rate from those humble beginnings to the house that became St Paul’s Eye Hospital and from there a building that contained 50 beds and treated 10,000 patients in a year.

Mr Walker also wrote many papers on ophthalmology to advocate effective treatments not only in Liverpool but around the world. Amongst the many important positions in connection with other charitable institutions he occupied, he also took a particular interest in infant blindness and gave his time as an honorary surgeon of the School for Indigent Blind on Hardman Street. This passion for helping Liverpool’s most needy of people, especially at a time that blindness meant it was virtually impossible to find work, was shared with his son, Arthur Nimmo Walker.

For 38 years Mr Walker worked in St Paul’s Eye Hospital and from the beginning, with the exception of a brief holiday, he visited the hospital daily until towards the end of 1908 when ill-health compelled him to go abroad to the warmer climate of Gran Canaria where he died on the 15th February 1909.  A memorial service was held in the Church for the Blind, Liverpool, for which he had done so much over the years as a warden. 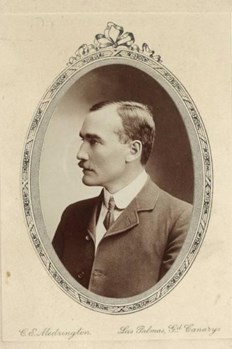 His work was carried on with great enthusiasm by his son, Mr Arthur Nimmo Walker, who had followed in his father’s footsteps to become a “brilliant ophthalmic surgeon”, as described in the British Journal of Nursing Supplement.  He not only undertook the work as a consultant surgeon in St Paul’s Eye Hospital, he also took up the honorary position in the blind school and he quickly realised that many causes of blindness were preventable. In particular, a disease called ophthalmia neonaturum - a form of conjunctivitis and a type of neonatal infection contracted by newborns during delivery that left them blind.  Mr Nimmo Walker realised that that many of the cases were due to the baby's eyes becoming contaminated during passage through the birth canal from a mother infected with gonorrheal infection and therefore the mother as well as the child needed treatment immediately to save babies from life-long blindness.

Mr Nimmo Walker recognised that with a disease occurring in a child so young it was important that the baby should go into hospital with its mother. Therefore a ward was set aside for that very purpose and effective treatment was administered without hesitation, day and night.  The ward was called the Alfred Booth Ward after the ship owner and leather and commodity trader. Mr Booth had spent the last 8 years of life associated 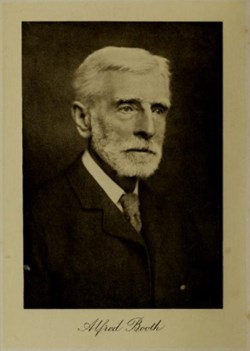 with the work of Mr Nimmo Walker to prevent infant blindness. A biography written by Mr Booth’s son recalled “He (Mr Nimmo Walker) talked over his theories and conclusions with my father, who gave him instant sympathy.  It can be easily understood how in one who, like my father, took such immense pleasure in the beauty of the world, the thought of ‘never seeing’ touched the keenest sense of pity.  The result was that my father worked with untiring energy to collect money to rebuild St Paul’s Eye Hospital, with a special ward to accommodate mother and child. This ward now bears his name. Dr Walker was further convinced that there should be compulsory notification of this disease; and here again my father gave him every encouragement and help in his power.”

The results obtained between 1908-1916 were “1,255 have been treated, 1,193 have been discharged cured absolutely, 53 damaged but not blind and seven blind”, a huge improvement on previous medical pathways. The work of Mr Nimmo Walker received international praise and prevented many more children around the world living a life in darkness.

Among his many roles, Mr Nimmo Walker was also a Lieutenant Colonel in the Royal Army Medical Corps (RAMC) and had been posted to South Africa during the Boer War.  His skills were called upon again during the First World War. As a Lieutenant Colonel he was in charge of a Field Ambulance.  The Field Ambulance was a mobile front line medical unit (it was not a vehicle), manned by 10 officers and 224 at full strength. The theoretical capacity of the Field Ambulance was 150 casualties, but in battle, especially at the Battle of the Somme where Mr Nimmo Walker was stationed, many would need to deal with very much greater numbers. The Field Ambulance was divided into three sections. In turn, those sections had Stretcher Bear and Tented subsections. RAMC officers and men did not carry weapons or ammunition. 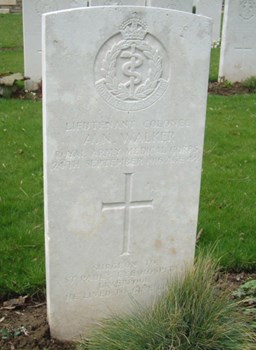 On September 24th 1916, Lt. Col Nimmo Walker was killed at the Front at the age of 42.  The hospital’s annual report of that year noted his death was at the “deep regret of the entire staff of the hospital.” He was buried the next day at Contalmaison Chateau Cemetery, close to the Somme – one of the bloodiest battles of World War One that raged on from the 1 July 1916 to 18 November 1916. More than three million men fought in the battle and one million men were wounded or killed.

A friend of Arthur's, James Barr, wrote an obituary in the British Medical Journal, published on the 7th October 1916.  James explains that Arthur's mother, Louisa Nimmo Walker, received numerous letters from the front, including one from the Assistant Director Medical Services (ADMS), who wrote, "I am not exaggerating when I say that Colonel Walker was my right hand man and I trusted and respected him to the utmost.  He was the soul of honour, as brave as a lion, beloved by his officers & men, and esteemed by every one in the division." The ADMS continued, ".... and I feel that later on it may be of some consolation for you to know that your son died as he lived, endeavouring to save the life of others. I shall always remember your son as a very gallant soldier, a typical English gentleman, and a dear friend."

James also recalled another letter to Arthur's mother from the senior chaplain who explained how Arthur lost his life. "It was a honour to know such a man as Colonel Walker. He was a man in a thousand and one only wishes there were more men like him.  His first thought was for those who were under his care. Indeed, it was through his care and thoughtfulness for his officers and men that he met his death.  When the shelling began he stood in the open and ordered his all his men under cover, and he would not move until he saw that all were safe first. A true and fearless soldier standing at his post to the last, always cheery, a true Christian and English gentleman, one beloved & respected by all who knew him.  His one thought out here was for you, his mother, you were always in his thoughts and your name was often on his lips."

Although these letters give an insight into Arthur's character and the type of family man he was, there are no accounts that describe the relationship between George and Arthur and so we must rely on what evidence there is. For example, Arthur following in his father's footsteps, he took risks to help others whether to help the poor of Liverpool or liberate a country, and the fact Arthur's portrait, shown above, was taken in Las Palmas where his father had gone for recuperation for the few months before his death - maybe whilst Arthur was visiting him, George encouraged Arthur to continue his work.  When the new hospital was opened in 1912, "the Lord Mayor presided at the ceremony and the vote of thanks to him was moved by Mr Sydney Stevenson and seconded by Mr Nimmo Walker" the new hospital included a doorway in George's memory.

We are sure George inspired Arthur, and that Arthur has similarly inspired others to help those affected by sight loss and this trend has been passed on from surgeon to surgeon over the 148 years that St Paul's has existed, preventing hundreds of thousands, and probably millions around the world, from having to live a life in darkness.

In 2015, the City of Liverpool recognised the work of St Paul's Hospital and Unit and awarded it the highest accolade it can bestow on an organisation, The Freedom of the City.

We can't be exactly sure what the future holds for St Paul's, but we suspect it is a bright one. 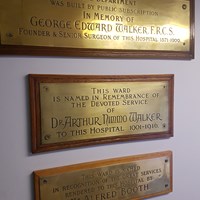 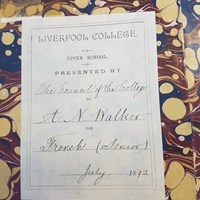 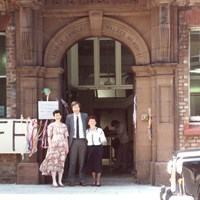 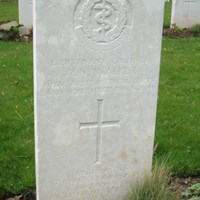 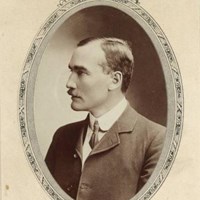 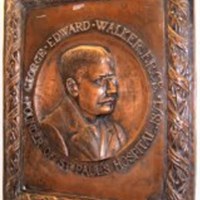 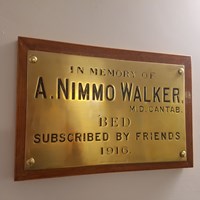 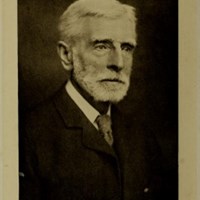 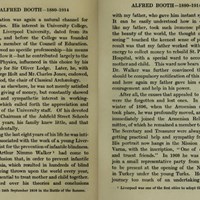