A 16-year-old St Paul’s patient has lost his sight, but that hasn’t stopped him from achieving his goals. Rainbow Mbuangi was born with aniridic glaucoma, a rare condition where the iris (the coloured part of the eye) hadn’t formed properly, which gave him very little vision.

Five years ago, he was admitted to St Paul’s Eye unit with a detached retina. The thin layer at the back of his eye (the retina) had become loose, which can lead to permanent sight loss. His right eye was deflated, and with his left eye his only source of vision, Rainbow was terrified that he’s loose his sight completely.

Rainbow’s nan and parent, Lyn Outram, 61, said: “St Paul’s were absolutely brilliant. They really fought to keep Rainbow’s eye alive, made him feel at ease and took the time to explain what was happening.

“We didn’t actually know that Rainbow had gone blind. His vision had always been so limited, but he was using his memory and hearing to get by. It was only when we came to St Paul’s that we were told that he’d already gone blind, and that put Rainbow’s mind at ease because he’d already been coping with only light perception in his left eye.”

As a huge sports fan, Rainbow’s passion in life has always been football, and his sight loss hasn’t stopped him from sporting success. He joined the Merseyside Blind Football Club two years ago and this year won the league and disability cup. He’s now training with England’s Blind Football Team and won silver in the World Cup and came third in the European Cup.

Lyn continued: “Rainbow never thought he’d be able to play football, but he’s doing absolutely brilliantly. He’s travelled to so many places with his team and he’s even won some sports personality awards."

“He has his moments where he felt angry or frustrated, but he’s so motivated and has built himself up. He gives talks in schools about supporting visually impaired children and has even been to Parliament with a poppy appeal. He oozes confidence – a lot of people don’t know he’s blind, and seeing how he’s getting on helps a lot of parents whose children are visually impaired.

“Coping with Rainbow’s sight loss has been emotional, and Rainbow has supported me in many ways when I’ve been upset over it. He has so much ‘get up and go’ and has always found a way over his obstacles so he can do what he loves - whether that’s riding a bike or playing football." 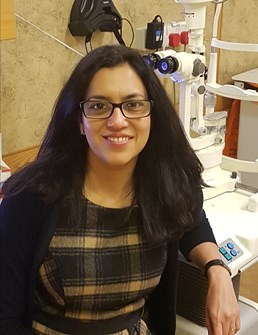 Consultant Ophthalmologists at St Paul's Eye Unit, Anshoo Choudhary, said: "Rainbow has been attending St Paul's since he was nine years old with a retinal detachment requiring surgery. I've known him since he was 11 when he first attended my clinic with very high pressure that required glaucoma surgery. Rainbow had great difficulty keeping his eyes open from the pain with the high pressure but even at that young age Rainbow faced all his challenges with utmost courage. I am really proud of his achievements. He is a perfect role model for people living with sight loss."

After overcoming the multiple challenges that sight loss brings, Rainbow hopes to make it to the Paralympics with his team.