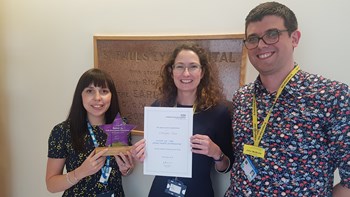 University Foundation Trust when they were awarded runners up in the Allied Health Professional Star Awards 2019.

The Orthoptic team are the only Allied Health Professional (AHP) team within St Paul’s Eye Unit.  They comprise of only 4 team members but through their innovative and resolute commitment to both patients they have a considerable impact on their service.  There was over 40 nominations for the award so the team have done St Paul's proud to have picked up a runner-up award.

The role of an Orthoptist has grown considerable in recent years. The Royal College of Ophthalmologists have recognised that the traditional eye health care team had to change and to develop to meet the demands on the hospital eye service due to an increase in successful, but recurrent, treatments and the increase in chronic disease management due to the ageing population in the UK.  In order to meet these demands some aspects of clinical work that were previously the domain of the medically qualified ophthalmologist can now being delivered by a broader multidisciplinary team.

The Orthoptic department have embraced this opportunity to develop their skills and help us meet the demands of one of the busiest eye units in the UK.  This has not only been important to develop their own skills but also increase capacity.

Our Orthoptic department have become pioneers in three particular areas; neuro-ophthalmology, YAG laser and Botulinum Toxin.  Each of these areas are also uniquely integrated with other specialities.

Each of the Orthoptists have undergone intense training both during working hours and also in their own time, the 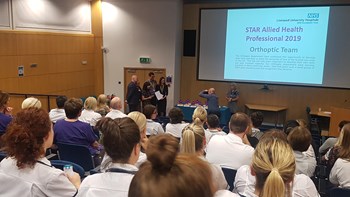 Consultant staff have been impressed by their professionalism, ability and confidence taking on non- traditional roles.

During this process the team have written new protocols, worked with existing and new guidelines, audited their clinics and monitored patient satisfaction.  All of the Orthoptists have acted upon feedback accordingly.

The impact of these specialist Orthoptic led clinics has been reduced waiting time for patients to access an appropriate  and efficient service provided by an Orthoptist that can build up a rapport with an unwell patient.

Jane and her team, Vicki, Claire and John, presented their poster at the Trust’s AHP Day on the evolution of the role of 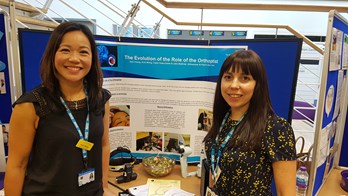