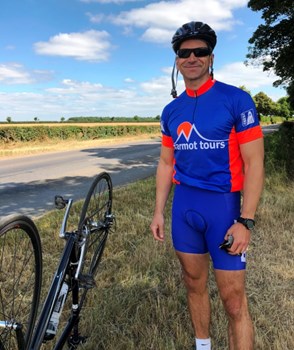 RAF Typhoon Display Pilot, Jim Peterson, and a team of 6 will be cycling 180 miles from RAF Coningsby to St Paul’s Eye Unit at the Royal Liverpool University to raise funds for its charity and say thanks for saving his sight.

In 2000, on a visit to Liverpool, a freak accident resulted in a shard of glass from a broken bottle flying into Jim’s left eye.  Jim was admitted into the internationally renowned St Paul’s Eye Unit, where consultant eye surgeon, Mark Batterbury, fought to save Jim’s sight and RAF career.

Mark performed an emergency operation and carefully stitched his eye with 12 sutures. Over the following 6 months, Jim’s eyesight returned and he was able to continue with his flying training and childhood dream of becoming a fighter pilot.

Jim said, “Ever since my parents took me to an air show in Bournemouth when I was 10 years old, all I have wanted to be is a fighter pilot, and to then have that nearly taken away from me was a low point in my life.

“I have never forgotten how lucky I was that day to be in the best pair of hands and receive the best care humanly possible.  To show my appreciation all these years later, the team and I are utilising a rare weekend off by cycling over 180 miles from RAF Coningsby, where 29 Squadron, Typhoon Operational Conversion Unit are based, to Liverpool to say thanks and raise some money for the hospital.” 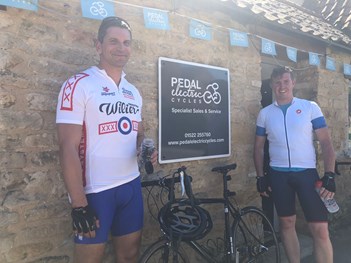 The journey will take the team from the extreme flats of Lincolnshire through to the extreme hills of the Peak District and probably all into wind.  They aim to reach Liverpool in less than 36 hours from when they set off (including sleep if they get any!)

The team are asking people to get involved with the challenge by following their journey on the twitter account, @TyphoonDisplay, and sponsor them.

Jim continued, “We know this challenge isn’t going to be easy but St Paul’s really is a special place for me and I know from my experience the tremendous work they do to prevent people losing their sight.  Every penny donated will be used by the specialist teams in St Paul’s to carry out pioneering research to prevent sight loss. Any donations will be very gratefully received and we thank you for your generosity.”

Consultant Corneal Surgeon, Mark Batterbury said, “I remember receiving the call on that day and due to Jim’s job instantly knew the potential impact that injury would have on his career.  It was a delicate but successful operation and I am so pleased to discover that Jim has climbed to the height of his career.

We are extremely grateful to Jim and the team for remembering us and for choosing to raise funds for our charity. We are fortunate in Liverpool to attract some of the world’s leading eye specialists to work here and share ideas on tackling some of the greatest causes of sight loss. The money raised will enable us to carry out our research to enable us to convert those ideas into world-leading treatments.” 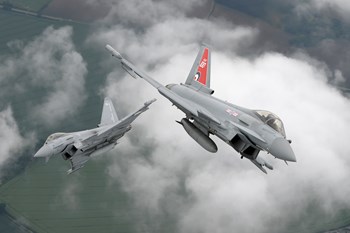 The team have already raised 25% of their £2,000 target before setting off and secured the support of officially licensed luxury leather military products producer Asali Designs. However, the team need your help to reach their target. You can sponsor Jim and the team by visiting their Just Giving page by clicking here