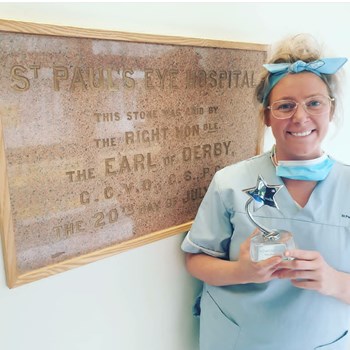 Hayley Sergeant received three separate nominations for willingly volunteering to be moved to ward 9Y as a Healthcare Assistant when Covid-19 struck - she wanted to care for the seriously sick patients that had started to be admitted and to also support colleagues on the ward.

When Covid-19 began to take hold it was a very worrying and challenging time for the department and the hospital as a whole.  The speed in which staff had to work during the unprecedented conditions took plenty of courage, leadership and action - and Hayley showed plenty of that!  9Y had been designated a 'Red' ward, meaning it became a ward for treating Covid-19 patients, many of whom were very poorly.

As a result of a family member needing to be shielded, Hayley still made the decision to help on the ward despite knowing that she would have to live in temporary accommodation for several weeks away from her family.

One nomination drew attention to the way Hayley supported an imaging colleague and her family, whose sister had been admitted to the Royal with Covid-19 and wasn't allowed visitors.  Hayley went out of her way to keep her colleague and the family informed of how the patient was doing.

Hayley returned to her imagining role when the number of Covid-19 patients reduced to a more manageable number. Upon returning, another nomination highlighted how Hayley worked really hard to catch up on the research projects she was working on.

It worth noting that Hayley is very humble, so the award came as a complete surprise.  Hayley explained, "When a few of the Senior Leaders Team walked into my office and say they wanted a word, I was very taken aback - even worried, I instantly thought 'what have I done?' To make it worse, Andrew (Hayley's manager) started the conversation with 'I want to talk about your recent performance....' followed by a short pause that seemed to last forever! 'It's been exemplary and that is why you have been awarded the Star Award!', he then said. I was speechless; I didn't know what to say except 'thank you', repeatedly! It was such a lovely surprise that I had been nominated and that others agreed that I should receive the award.  I said I wanted to give them all a hug, but that's out the question with distancing still in place."

The St Paul's Star Award is awarded four times a year to staff that have gone above and beyond to make an outstanding contribution to the service we provide for patients.

Consultant Optometrist, and manager of the imaging team, Andrew Tompkin, said “I am delighted Hayley has been recognised for the care and dedication she demonstrated for patients. It is the people and their actions, like Hayley's, that makes St Paul’s a special place to work.”