After 43 years of extraordinary service to St Paul’s and our patients, 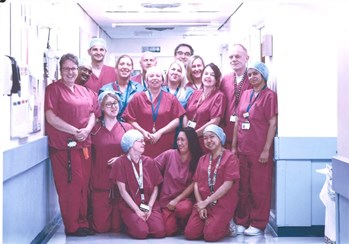 Sister Gill Purcell is retiring from her duties in St Paul’s theatres.  Although it has been expected for some time, her last day on Wednesday will still be difficult for staff as Gill’s legacy comes to an end.

Gill did her nurse training at Walton and Fazakerly Hospital in 1975. When she qualified she worked at Walton Neuro for 6 months before starting the Ophthalmic OND course.

Upon completing the course, Gill’s began as a Staff Nurse at St Paul’s Eye Hospital on the Old Hall Street site in 1978, following her Mum and Aunt who also worked there. Gill later became a Sister on ward 1A.

After returning from Maternity leave in 1985 Gill took up post as a Sister in theatres and discovered that week that she was on call that weekend…alone!

The on-call required Gill to come in to clean the theatres, stock up and wash and prepare instruments for the following week, so she had to quickly familiarise herself not just with the role but where everything was kept.  If an emergency case came in and the patient required surgery Gill would have had to ask a member of the ward team to come and help, and of course that is what happened… a perforating eye injury requiring urgent surgery!  Did Gill rise to the challenge; of course, it is Gill and she has always been adaptable.

It is the ability to adapt that has enabled Gill to embrace many changes in the department over the decades. Whether the implementation of new technology, procedures or new surgical techniques, Gill has always been up for the challenge, dedicated and willing to learn new skills and teach others.

Continuity of care across the city has always been a driving force in the NHS and with Gill’s wealth of ophthalmic knowledge, experience and expertise meant she has worked in other hospitals. In the 1990’s Gill worked one and half days of her week in Alder Hey. She was a scrub nurse in the theatre for the paediatric cases, and would also order equipment when needed. Gill has also worked in other areas within the department to look after patients including, until a few years ago, working every Tuesday in clinic as the vitreo-retinal nurse. This role was valuable to both the surgeons and the patients as she provided the support and information required for the patients about to undertake retinal surgery, and would organise the preoperative investigations required so theatre lists would run smoothly. Gill has always gone above and beyond her role to ensure the best possible care for her patients.

Although Gill is modest and wouldn’t agree, her colleagues will testify that 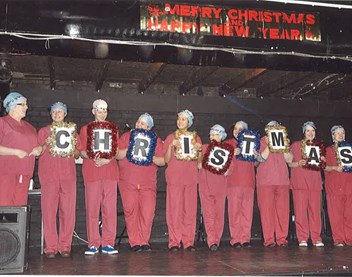 Gill’s professionalism and dedication to her role is evident in everything that she does.  One said: “She has unwittingly become a role model for many of her colleagues. She has been instrumental in many of the changes that have happened in the department over the years; always patient, respectful of patients and colleagues and always approachable.  Gill has been a great mentor, friend and colleague to us all.”

Outside of work, Gill has left staff with many fond memories of nights out, including a trip to Durham that resulted in them all nearly missing the last train home; but even that journey home became one of much laughter.

When asked to sum up Gill, one colleague simply said “Great sense of humour, fun, caring, modest and loyal!” 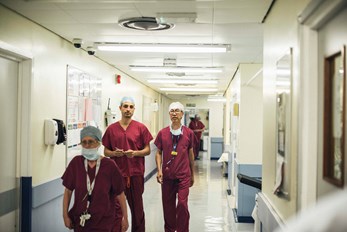 and loved by all the team and she will be greatly missed.

As Gill approaches a new chapter in her life full of opportunities and experiences, we all wish Gill a wonderful and well deserved retirement after 43 years of commitment to patients and her profession.