You might remember a few weeks ago that we posted an article about awards for which our staff had been nominated. Well, of the three award nominations we scooped two and a got a ‘highly commended’ in the third which is a fantastic achievement. 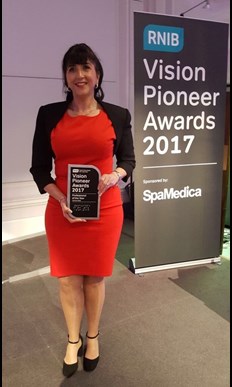 Corinna Swift – our Eye Clinic Liaison Officer – was named Professional of the year at the RNIB Vision Pioneers Awards. She had earlier also won the Best patient support or education initiative prize at the Bayer Ophthalmology Awards. Our corneal cross-linking team achieved a ‘highly commended’ prize in the Best ophthalmology team category`, which was another fantastic result when you consider the calibre of the other entries.

Corinna said: “I was so shocked! It was an amazing honour for me, but I was really collecting the awards on behalf of the staff at St Paul’s Eye Unit – especially the Outpatients team. I just wanted to thank them for all of their support.”

The Bayer judging panel said of Corinna’s work: “We all agree that this initiative is improving the experience for patients across the whole trust. The judges felt that it was a remarkable achievement.” 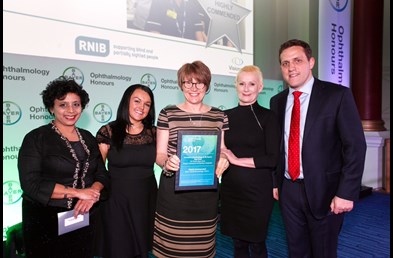 Their comments regarding the corneal cross-linking team were also effusive. They were described as “a small, focused and extremely enthusiastic team, who demonstrated a great support network. A number of the judges noted that it would be great to roll-out this initiative across the UK to help a number of centres.”

Our clinical director and consultant ophthalmologist, Mr Mike Briggs, is very proud of all of his staff: “I am delighted that Corinna won these awards. She thoroughly deserves these accolades in recognition of her very hard work on behalf of our patients with sight impairment. On top of that the corneal cross-linking team’s ‘highly commended’ award reflects that the team, led by Claire Britten and Professor Stephen Kaye, has developed a nationally-respected treatment program for patients with keratoconus. Congratulations to all of those involved.”

Both teams have already been approached by other eye professionals interested in learning from the St Paul’s approach, so hopefully our good work will help even more patients with sight problems.