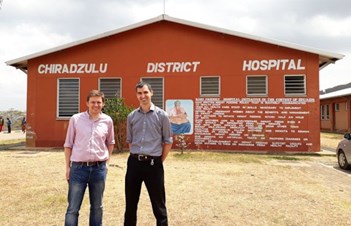 Malawi, like many African and east Asian countries, is experiencing a dramatic rise in cases of both diabetes and diabetic retinopathy. At the moment about 6% of the Malawian adult population has diabetes, a presumed consequence of improvements in live expectancy, urbanisation, westernised diet and sedentary lifestyles. The rates of diabetic retinopathy – a condition which is caused by diabetes and can cause permanent sight loss – are five times higher than in the UK, and the disease progresses at three times the speed. Given that diabetes and diabetic retinopathy affect the working age population, this has huge implications for the Malawi health care system, the economy and society in general.

Dr Phil Burgess, together with Professor Simon Harding and Dr Ben Turner who has recently started a clinical research fellowship in Blantyre, visited Chiradzulu District Hospital to see the impact of diabetes on the local population. There they met ophthalmic clinical officer, Mr Nankwenya, who explained the issues he faces in treating diabetic patients.

Erratic supplies of insulin and diabetic tablets are a big issue, and mean that diabetes is poorly controlled, as is high blood pressure which is common in patients with diabetes. The team also spoke to patients, nurses and doctors, and uncovered a number of misconceptions and a fundamental lack of understanding about diabetes. One example concerns patients’ non-attendance at clinic until they are losing their sight. Even when offered laser eye treatment most fail to attend. This was found to be partly down to patients fearing the complete loss of an eye: diabetic patients with a bad foot often have it surgically removed so why wouldn’t a diabetic patient with poor vision have their eye removed?

The cost and time taken to travel to a diabetic clinic was also found to be an important factor in non-attendance. It can cost anything between a day’s and a week’s wages to travel, plus the loss of working time. Together these factors result in just 220 people attending the Chiradzulu diabetic clinic, in a population which probably has around 7,500 people living with diabetes. 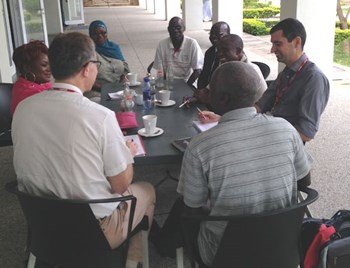 It is apparent that a lack of awareness plus other societal factors are an issue. HIV and AIDS are known about but not diabetes, and that needs to be addressed. Ubiquitous mobile technologies will be important in the battle, both in terms of diagnosis and patient contact. The support of the Malawi Diabetes Association, a grassroots advocacy group, will also be vital.  Nurses in Chiradzulu are confident that people will embrace preventative measures if they understand them, so there is some reason for optimism.

To discover other work being conducted in Malawi by St Paul's staff read Microbial keratitis in malawi and diagnosing cerebral malaria in comatose children.