See more
Home Your new Royal The story so far

The story so far

The vision for the new Royal was not a just to replace an out-dated building with a more modern and welcoming one. It was about creating a completely different kind of hospital at the heart of a radically renewed and improved local health service.

This concept aligned with national and local priorities to deliver more care outside hospital, whilst ensuring the new Royal became a world class facility for urgent and specialist treatment. Approval for the new Royal was supported by local health commissioners, Liverpool City Council and the Department of Health (as it was called at the time).

They all recognised the need to replace the current Royal but also the opportunities for the new Royal to be the catalyst to transform health and prosperity in Liverpool.

The original cost for building the new Royal was £335m. Funding would come from Private Finance Initiative (PFI) with around three quarters of the funding coming from public sources including the European Investment Bank, the Department of Health and the Trust. Under the original deal, the annual repayment would be less than 6% of Trust’s income compared to 15 to 20% of earlier PFIs.

The contract for the new Royal was signed by the Trust and developers Carillion in December 2013. The firm were awarded the tender following a detailed and extensive bidding process, set by national guidelines, and following approval from the Department of Health and Treasury.

The proposed design submitted by Carillion was regarded as the better solution on the analysis of the qualitative evaluation, particularly as it allowed for more efficient movement of patients within clinical areas.

When Carillion joined the bidding process for the new Royal, they were one of the world’s biggest construction firms, well known for building roads, schools and hospitals across the UK. 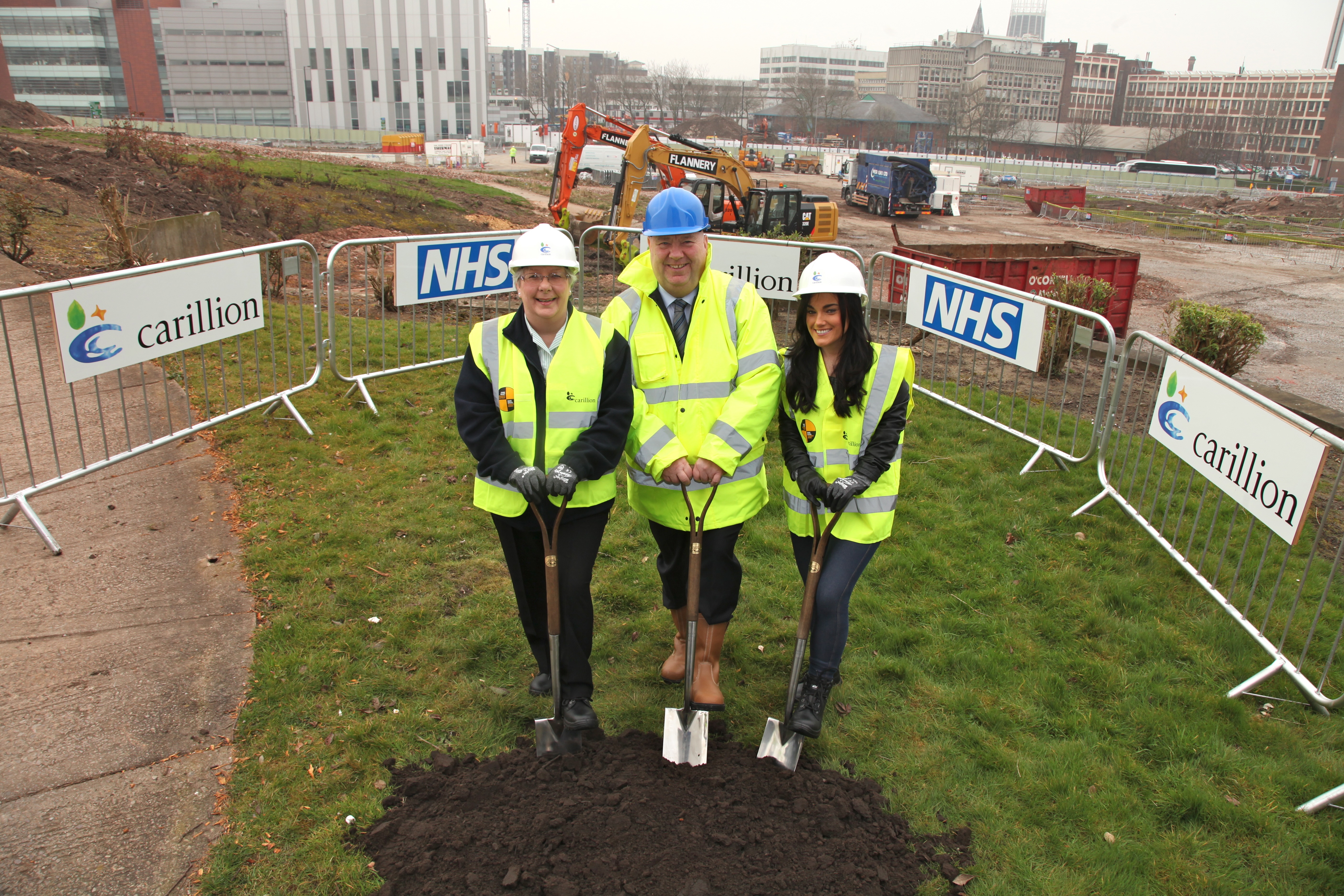 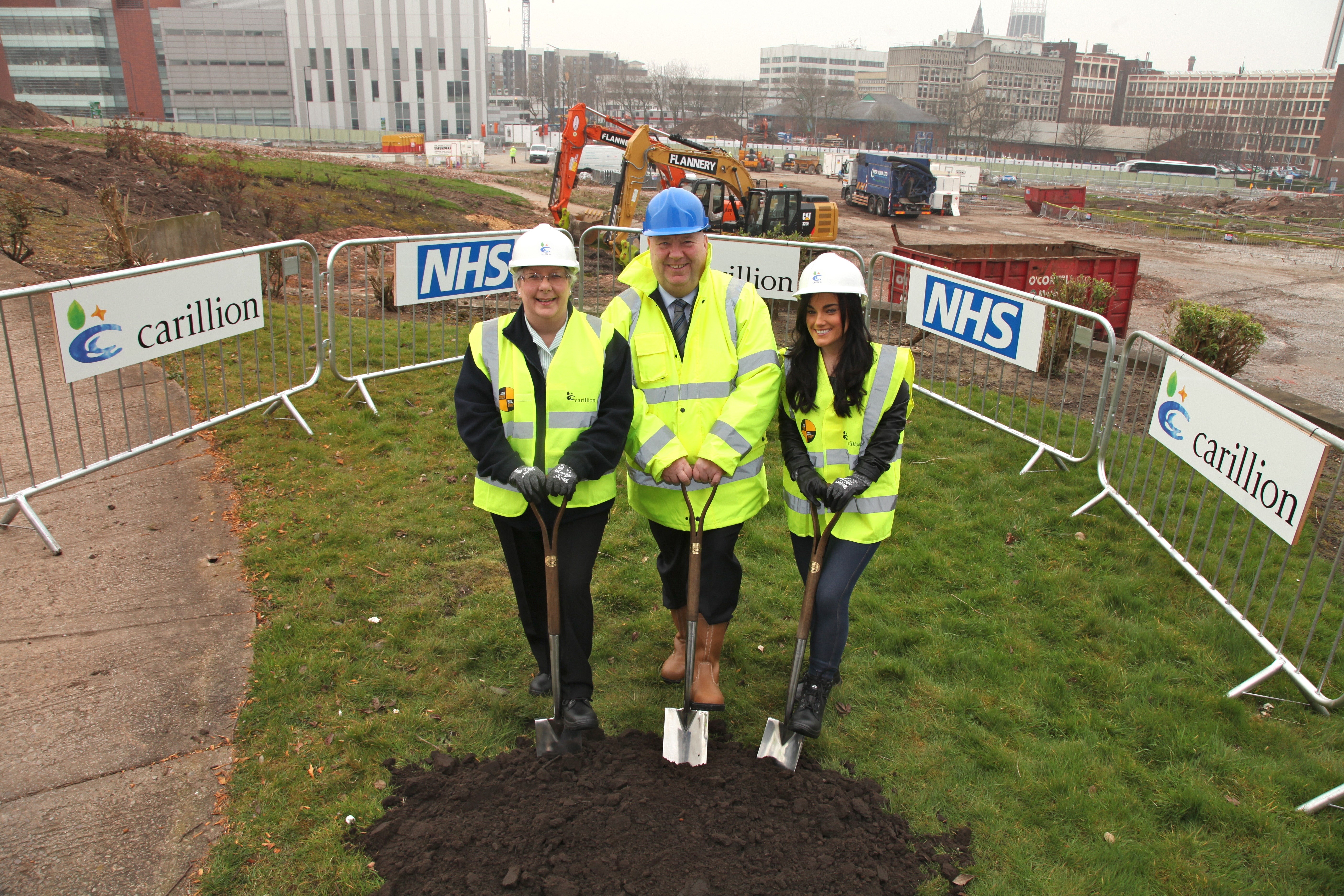 Construction on the new Royal began on 3 February 2014 and was originally scheduled to be completed by March 2017.

The official turf cutting was carried out in March 2014 by Liverpool Mayor, Joe Anderson, alongside Chrissie Hyland, who has worked at the hospital for over 40 years and Vicky Horsley a former patient at the Royal and Alder Hey. 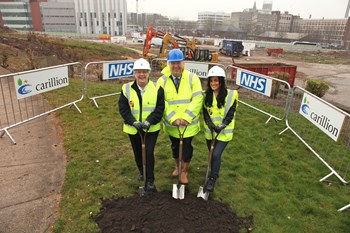 In December 2015 the new Royal ‘topping out’, ceremony was performed by the Deputy Lord Mayor Cllr Roz Gladden.

However the project was delayed, according to Carillion, due to issues regarding the removal of asbestos from the ground, strong winds affecting the use of cranes and structural issues with a number of beams.

A revised completion date of February 2018 was provided by Carillion, however at the end of November 2017 they informed the Trust that they would be unable to meet this date.

By 2018, the exterior of the hospital was largely completed and the focus had been on finishing the interior. When Carillion entered into liquidation in January 2018, a new completion date had not been provided and all work on the new Royal came to a halt. 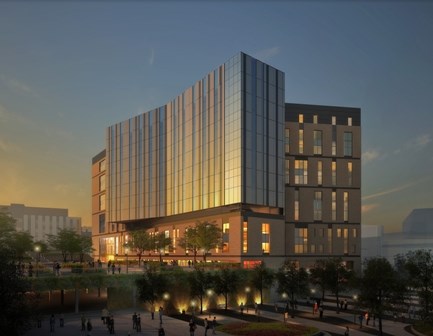 The collapse of Carillion created an unprecedented situation with numerous complex legal and commercial issues to resolve. There followed months of negotiations between the Trust, the Hospital Company (Liverpool), government departments, legal teams and contractors. All parties had been committed to getting an agreement that enabled construction to restart as soon as possible.

Support from local politicians, our staff and patients has been fantastic, By 30 September 2018, the Trust had an agreement in principle with The Hospital Company (Liverpool) on the way forward for the new Royal.

The 2013 PFI agreement was terminated and responsibility for completing the new Royal was transferred from the Hospital Company to the Trust, with the backing of the Department of Health and Social Care. This meant the new Royal was brought entirely into public ownership and would no longer be a PFI scheme. 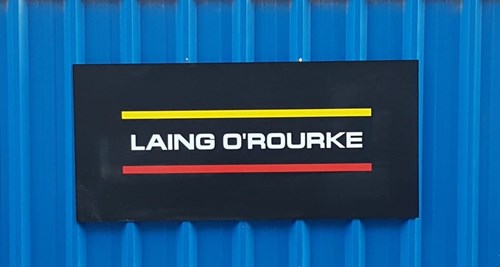 Laing O’Rourke took over as management contractor and began work on the site in November 2018.

At this stage the majority of work had been completed, but remedial works were needed on structural issues with beams. These works are highly complex and will take time. Together with Arup and Laing O’Rourke we have produced this short film to explain these works.

There are currently around 60 contractors and over 385 workers on site. Construction is progressing well and work on the structural issues is ongoing. Scaffolding has gone up around parts of the building, with cranes and high access equipment being deployed as parts of the cladding and exterior have been removed. This has been to allow access into the building for equipment and materials being used to fix the structural issues. This work involves providing the 220 cubic metres of concrete reinforcements required to the structure. To help understand this complex process and reassure you that every measure is being taken to ensure the building is finished to the high standards required, we have created this short film for social media.

The other key element of the remedial works is installing 165 tonnes of new fabricated steelwork parts.

The solution for the external cladding that needs to be removed is still being worked through with specialist advisors. Once this solution is confirmed, we will have the full costs and timescales.

Once the programme is finalised and the costs are all accounted for we’ll confirm timescales and costs. We owe it to everyone to not raise expectations until everything is signed, sealed and delivered. Our priority is to deliver the state of the art facilities that our patients and staff need and the world class hospital we’ve all been waiting for.